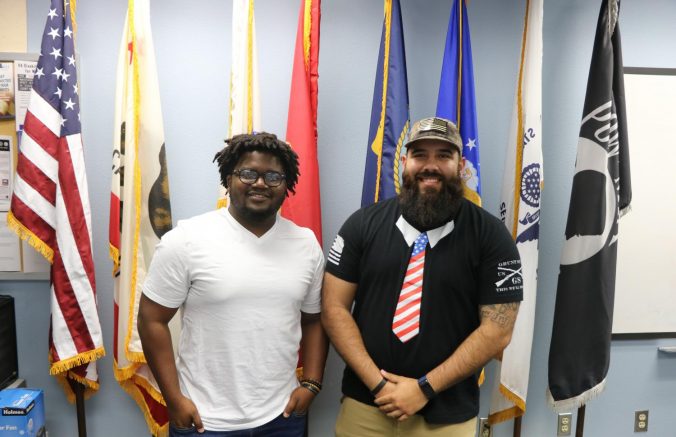 Former military members Eugene Dehoney (left) and Jose Bueno (right) pose for a picture at the Veterans Resource Center at American River College on May 1, 2019. (Photo by Anthony Barnes)

For many at American River College, that journey can be complicated and difficult one. According to its website, the ARC Veterans Resource center serves as an outlet to help veterans with the transition from military life to college life.

Jose Bueno, welding technology major, spent a total of eight years in the military stationed at both Fort Riley, Kansas and Fort Hood, Texas before separating from service in 2015. He recalled what campus life was like when he first came back to school.

“It was rough, the very first thing you encounter is the structure system,” Bueno said. “Everything in military life there is some sort of structure or organization, when you get out you have to fend for yourself, you have to recreate all that by yourself.”

Eugene Dehoney, a communications and social sciences major, was stationed at Marine Corps Base Hawaii for four years before leaving in 2016. Dehoney says he initially hesitated when it came to asking his professors for assistance.

“In the military, you get explained something, someone breaks it down and you’re just trying to get the job done,” Dehoney said. “Just being able to ask for help, meet one on one with my professors, I didn’t want to want to put myself out there and make myself vulnerable.”

According to Bueno, there is a misconceived notion that the extra or better treatment that veterans may get can also be a roadblock for some.

“A lot of veterans don’t want to play that card,” Bueno said. “It’s either ‘I’ll just figure it out on my own, or someone else probably needs more assistance than I do’.”

One area that Bueno feels can be improved is in the interactions between both professors and counselors with veterans. He also expressed the dilemma some veterans feel they are in when it comes to asking for assistance.

“A little bit more information could be sent out so whenever they’re face to face with a veteran they understand what we might be experiencing,” Bueno said.

Interim supervisor Robert Heryford began working at the VRC in 2017 and served in the Air Force for four years while stationed at Beale Air Force base. He said he wants to help other veterans who may be struggling.

“ARC was one of the first places that helped me get a sense of direction after I had transitioned out of the military,” Heryford said. “I wanted to come back to support veterans like myself and help make their transition to college easier than mine was back in 2011.”

One note of concern that many on campus may be unaware of is the difficulty of scheduling VA hospital visits according to Bueno. They are usually first come first serve and if missed for any reason it can cause a huge inconvenience.

“They’re not open to negotiation on when you can come in for an appointment, you have to be there or you have to wait six months for the next opening,” Bueno said. “That’s one thing that I’m upfront about with my professors.”

Both Bueno and Dehoney touched on the assumptions and stereotypes that come with being a veteran and how it sometimes made them hesitant to reveal this information.

“I didn’t like proclaiming I was a veteran. I just want to be treated like a normal person, I don’t want special treatment,” Dehoney said. “I feel like some people feel like vets are crazy, we’re not all crazy.”

A lot of this stems from media portrayals of veterans as suffering from both mental distress and physical ailments, according to Dehoney.

“I don’t want them [professors] to think I’m broke or have a prosthetic leg,” Dehoney said. “I know there’s vets that do have those type of needs but not all of us do.”

The VRC also has a wide variety of services designed to help students that are veterans. The services include a computer lab, local Veterans Affairs representatives and assistance with both ARC and VA registration forms.

“It’s a one-stop shop, they help you get your education benefits going,” Dehoney said. “We have plenty of vets that come in, you can always meet somebody, talk to somebody and get help.”

Heryford’s role as supervisor includes task such as conducting trainings for veteran needs and also working with other ARC departments so they can be informed regarding Veteran needs.

“​The VRC provides veterans with an area they can feel comfortable in and meet fellow veterans while navigating the campus and rebuild the camaraderie we miss when we separate from our service,” Heryford said.

All veteran students are encouraged to visit the resource center for any questions or concerns.  Students can reach the Veterans Resource Center at (916) 484-8135.

Supporters line up in the heat to hear Tump speak