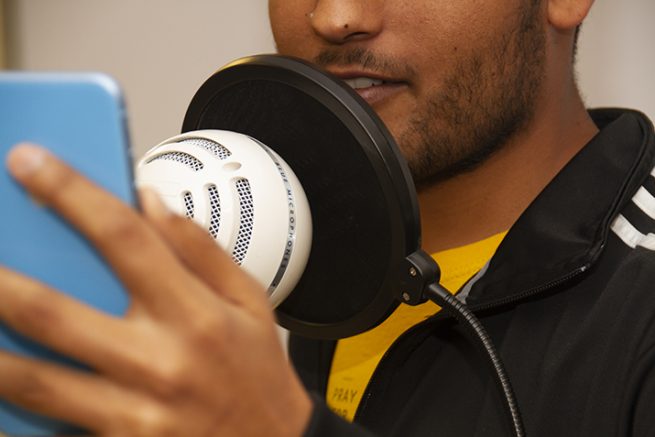 American River College is the home of many aspiring and former hip-hop and rap artists, including current and former students and staff. (Photo illustration by Jennah Booth)

Many people want to be artists, including people that want to become rappers or MCs or they want to work on production. Including people close to our area, current and former students as well as staff members.

Many people want to make it big time in the music industry. Whether it’s playing an instrument, singing or being in a band. Being a rapper or producer is also very popular in today’s music world at American River College.

On SoundCloud, a music streaming platform, there are millions of artists hoping that one day someone big will recognize their music, sign them and offer them loads of money to continue their music career; and some of those artists are part of the ARC community.

At ARC, there are all different styles of hip-hop floating around; including dance. Dance derives from hip-hop as it is has street dancing, competitive hip-hop dancing and break dancing.

Josh Bonzo works at the UNITE Center and his passion for hip-hop derives from break dancing; he argues that break dancing is one of the biggest genre of today’s hip-hop culture.

“Hip-hop nowadays is literally a lot of things. Growing up as a break dancer I listened to hip-hop artists from underground and into mainstream,” Bonzo says.

Bonzo helps run the event Tell it Tuesdays event on campus in the Student Center every other Tuesday. Tell it Tuesday is when people can come on campus and perform their music or say a few lines, poetry and more.

“We have Tell it Tuesday and that’s a form of hip-hop because people are using their spoken word poetry or even music sometimes,” Bonzo says. “It’s not even poetry sometimes. Sometimes people come sing and say meaningful stuff.”

ARC is an open campus; people who don’t even attend ARC are allowed to come in to play their music, freestyle (rap), poetry and much more, according to Bonzo.

Rapper and Sacramento native JMac or Jordan McCormick, for example, is known by other artists in the music community at ARC but isn’t a student at the college. He has attended Tell it Tuesday a few times to share his music with other people.

On McCormick’s birthday this year, Feb. 25, he released his newest mixtape on SoundCloud, “Born Alone, Die Alone.” The album consists of 17 tracks and is almost an hour long.

“For a while I would just make music for fun because in my mindset I thought it was easy,” McCormick says. “I see other people doing this and I thought if they could do this, then why can’t I do this myself. I started taking it more serious and I’m not to the full extent I want to be at.”

McCormick says he feels his music is more of a subgenre in conscious rap because of the deep meanings in his lyrics. He says he wants his music to make people understand where he comes from.

“Especially nowadays with a lot of controversy going on, a lot of negative stuff going on [that’s] negative in the environment and community, it’s always good to have conscious rap because it brings the reality to the music,” McCormick says. “People would listen to more music then they would news or anything else.”

McCormick says that he will continue making music because of what he uses music platform for.

“Even though I do have a lot of self-doubt but I’m most definitely going to keep doing it until I can’t anymore because I have a voice,” McCormick said. “Even though I may not have a big following, I still have voice even if one person hears what I’m saying and they take it to heart, it means something.”

Rafael Rivera is another ARC connected artist. Rivera has been a counselor at ARC for 13 years and he’s been apart of the music industry in a number of different ways.

Rivera grew up in New York while rap music was growing in the 80’s and his father was a salsa producer in the clubs.

Rivera started the rap group, Sons of a Rough One, with his three brothers and his cousin in Los Angeles in the early 1990s after graduating from University of California, Davis. The group performed for about eight years. His group got studio time and opened for famous hip-hop artists like Daddy Freddie, College Boyz and Earth Quake; but unfortunately, the group never reached its full potential.

Rivera returned to Sacramento, where he began another group called No Mad Order. The group opened up for rapper KRS ONE but Rivera said this group was thriving until one of the producers didn’t want to sign to a label so the producer left.

After that, he quit making music, got married, earned his master’s degree in counseling and had kids, until one day he saw his son producing beats on his laptop about a year ago.

“My son starts working on a computer and he starts programming drum tracks,” Rivera said. “I was always more on the rap side but payed attention to the production side, so what he did is he started to make a beat and I started to freestyle (rap) to it and we just caught a vibe.”

Because Rivera is from New York and was influenced by his father make club style music, he and his son had completely different tastes. Rivera’s son wanted to make beats similar to trap music, a popular style of music created in the late 1990’s in the South. While Rivera wanted to stick to his roots and produce beats similar to the a New York style and rhyme over them. Eventually, him and his son found a way to coexist.

“I’m old school. I’m more of that late ‘80s, ‘90s hip-hop boom bap style. But he is 16 and more of that trap wave, which is a different genre and I blocked that out,” Rivera says. “I kind of had to change my attitude and kinda begin to learn about the trap style and what made it work.”

While Rivera says he wants his son to focus on getting an education and playing varsity baseball for his high school team, the duo enjoy make beats during their free time.

The father-son duo goes by the name of Sound Radicals and the music is available to stream on SoundCloud. Rivera says they aim to come out with a five-track instrumental-only EP over the next five months, and are hoping to come out with a full mixtape with beats produced by him and his son sometime this year.

The community of hip-hop is continuing to rise, especially with students making big names for themselves. The idea of spreading knowledge through music is key to the listeners.Big or small, everyone has a voice in what will benefit them on the come up.