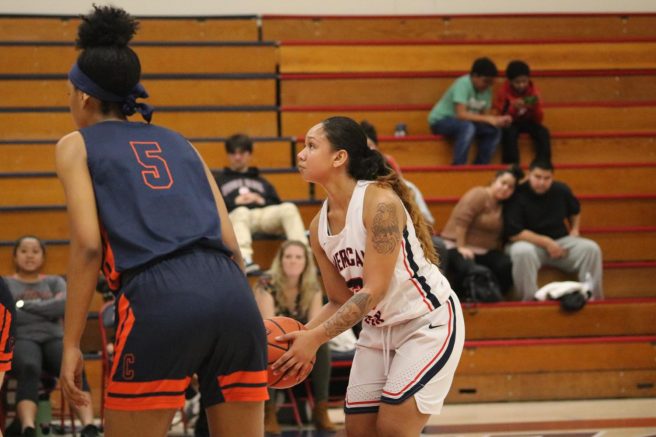 Guard Shantanice Mendoza prepares to shoot a free throw in a home game versus Cosumnes River College on Jan. 31, 2020. (Photo by Thomas Cathey)

The women’s basketball team at American River College emerged victorious in its home game against Cosumnes River College on Jan. 31, winning via a final score of 63-53. With the win, ARC snapped a six-game losing streak and improved its overall season record to 11-11.

In the first quarter, both teams engaged in an evenly fought battle, as there were plenty of lead changes throughout the game. Guard Lindsey Yep scored a couple of three-pointers early on to help ARC keep up with CRC’s busy offense.

At the conclusion of the first quarter, Cosumnes River had a slight edge over ARC, leading them with a score of 17-15.

But in the second quarter, ARC managed to separate itself from Cosumnes River, as their defense was able to hold them to just four points for the full 12 minutes. Sophomore Shanice Daniel led the team in rebounds, earning seven of them by the end of the night.

Daniel’s rebounds as well as the offensive effort from the rest of ARC’s lineup gave the team some breathing room on the scoreboard, going into halftime leading CRC with a score of 34-21.

After halftime, Cosumnes performed considerably better on offense. However, the team was unable to stop the offense of ARC, as they scored 18 points to only 13 for Cosumnes River.

Cosumnes River had its best quarter in the fourth, scoring 19 points while holding ARC just 11. Despite falling into a bit of a slump toward the end of the game, ARC still held on to the lead and came out on top.

ARC freshman Anthonya Sanchez, who scored 11 points with four steals and five rebounds, said that maintaining an optimistic outlook was crucial for her and her teammates to break the six-game losing streak they had going into the game.

“The deciding factor [in breaking the streak] was us staying together as a team, being positive and just ignoring all the negative,” Sanchez said. “We did have adversity with the last few losses. We’ve been working hard in practice, running extra sprints and everything like that so I think we were just hungry, positive and motivated.”

ARC Sophomore Shantanice Mendoza also finished the game with 11 points. She said she believes that coaching and slight tweaks in preparation was instrumental in earning the victory.

“It was definitely trusting my coach and what she’s saying, staying focused, making the adjustments and that’s just about it,” Mendoza said.

ARC volleyball victorious in first round of Norcal Regional Championship

Mens basketball in pursuit of a playoff berth

Be the first to comment on "ARC basketball team wins conference game against Cosumnes River, 63-53"