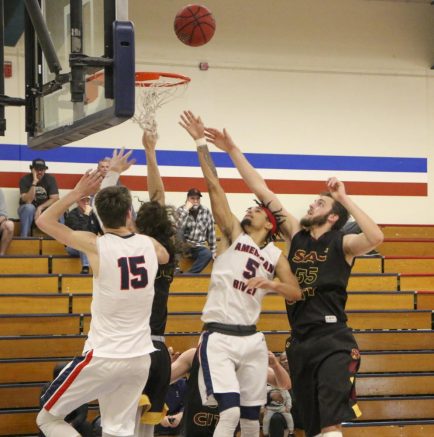 Sophomore Jashon Lewis works with teammate freshman David O’Looney to get a rebound in their game against Sacramento City College on Jan 24, 2020. (Photo by Josh Ghiorso)

The American River College men’s basketball team was defeated at home by one of its biggest rivals, Sacramento City College with a score of 75-64 on Jan. 24.

The entire game was a fight. ARC scrapped for the ball up and down the court, each team fighting hard as the local rivalry between the two teams was evident, even with this new team.

During the first half of the game, ARC and Sac City were evenly matched, exchanging points, with neither team getting any real lead. But in the second half Sac City started to pull ahead very slowly as ARC struggled to make shots land.

ARC moved the ball around the perimeter looking for shots. However, with strong defense from Sac City, ARC could not find any easy shots and could not break through the Sac City defense to drive to the hoop.

With only a couple of minutes left in the game and a few points down, ARC started fouling Sac City, sending them to the free throw line. This stops the clock and gives ARC  the chance to recover the ball if Sac City misses their free throws. However, Sac City kept making their free throws and gained more of a lead.

Freshman Prubhprit Sanghera said he felt that Sac City just “out hustled” them.

“The point of view from the bench, they were just out hustling us a bit, just like on 50/50 balls.” Sanghera said. “We weren’t playing the best we could.”

“I think that going into the game we were just kinda flat energy wise,”  sophomore and team captain Chris Cagle said.

Cagle added that it was also the mindset that they come onto the court with, that they weren’t ready for hustle of Sac City.

ARC also struggled to keep possession of the ball as numerous fouls were called against them  early in the game and forced turnovers, killing any momentum that they were building.

While players said they were frustrated with the amount of fouls, they said they understood it was a part of the game.

“You’re not always going to get perfect calls, no refs are perfect and you just gotta play through it,”  freshman David O’Looney said.

When asked how losing affected him, freshman Rahjae Johnson said there is no such thing as losing, only wins and lessons.

The next game will be at American River College against Cosumnes River College, on Friday Jan. 31 at 5:30 p.m.