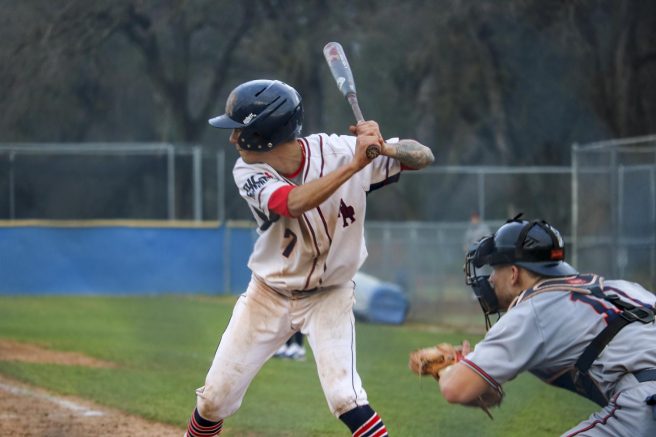 Second baseman Daniel Paiz steps up to the batter box to help his team by getting a hit against West Valley on Jan. 25, 2020. (Photo by Brandon Zamora)

In a tough fought game that wasn’t decided until the very last out, the baseball team at American River College fell short in its game against West Valley College on Jan. 25 at ARC’s Beaver Field. The final score was 8-7, bringing ARC’s record to 1-1 to start off the new season.

ARC had a rocky start to the game as pitcher Aiden Taylor gave up a three-run home run at the top of the first inning. As a result, the Beavers found themselves in an early 3-0 deficit to start off.

Throughout the game, ARC would get runners on base as their hitters had no problem making contact with the ball. However, they couldn’t get their baserunners all the way to home plate early on.

ARC would eventually get a point on the board after catcher Dom Moreno singled and got a Run Batted In (RBI), making the score 3-1 after the fourth inning.

After two scoreless innings and more baserunners on both sides failing to make it to home plate, ARC was able to tie things up in the seventh inning after first basemen Brooks Mithcell doubled, and got a two run RBI to tie the game up 3-3.

The eighth inning turned into an explosion of offense as West Valley scored scored a total of five runs, including another three-run home run by catcher Steven Grizzle which made the score 8-3, with ARC down to their last six outs of the game.

After the top half of the eighth inning, the crowd was dead silent. Everyone just sat around with blank expressions on their faces, wondering if ARC could turn this around and make a comeback.

That’s exactly what ARC was on the verge of doing, as the Beavers would answer back by scoring four runs of their own in the bottom of the eighth. A total of five hits from ARC’s offense and driving in four points made the score 8-7 at the end of the eighth.

Unlike the eighth inning however, not much offense was generated by either team in the ninth inning as the score remained the same. ARC would fall to West Valley 8-7 at the conclusion of the game, suffering their first loss of the season.

Head coach Doug Jumelet and his team declined to give any interviews to the Current after the game.

ARC’s next game will be on the road as they face off with West Valley in a rubber match, which will decide the winner of their three game series on Tuesday, January 28, 2020 at 2:00 p.m.