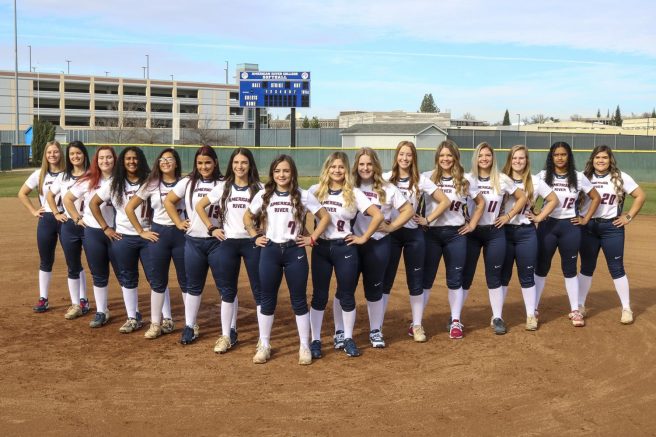 American River College’s softball team lines up on the ARC softball field on Jan. 24, 2020 for their team photo, standing ready for the upcoming season as one united team. (Photo by Brandon Zamora)

Despite a disappointing season last year, the women’s softball team at American River College is entering the 2019-2020 season with confidence in themselves to do better.

ARC’s softball team went 14-20 last season,  only winning nine out of its 21 games against conference opponents. Yet, both players and coaches feel they can turn this season around and improve on their game plan to not only have a better season, but to come out on top.

Head coach Lisa Delgado is in her 17th season coaching for ARC’s softball team. While she knows that the schedule for this season is tough, she says she believes in her team’s ability to face those challenges and become conference champions.

“Every Big Eight Conference game is a battle for this team,” Delgado said. “We expect to finish on top of our conference this year.”

Out of the 17 players on the roster this season, nine of them are returning players, while the other eight are new freshmen players.

Delgado pointed out that the key to success this season is through their pitching. She especially has a lot of confidence in her freshman pitcher, Cassie Ralston.

“Our incoming freshman pitcher, Cassie Ralston, will be our number one pitcher in the rotation this season,” Delgado said. “We expect to get a lot of innings out of her.”

One of ARC’s returning pitchers, Savannah Rogers, acknowledges there are areas where she’ll need to improve on in pitching. She says she believes that if she can develop her skills in these areas, she’ll help her team more this season.

“I want to be more calm and confident on the mound,” Rogers said. “Last year I struggled with trusting myself, but I know I have a great team to back me up so I need to have confidence to do my job as they’ll do their job.”

In her freshman year, Rogers finished the season with a 5-5 record, 14 total strikeouts and only allowed a total of six home runs all season. Rogers also finished last season with a 4.64 Earned Run Average (ERA).

Ciera Pyle is another returning player for ARC’s team; Last season, Pyle played at second base but now she’s moving to shortstop.The main area she wants to develop from last season is her gameplay mentally.

“I definitely want to improve on my mental game in both the batter’s box and on the field,” Pyle said. “I want to be more calm and collective rather than going 100 miles per hour all the time.”

The one big takeaway that all the players seem to have entering this season is the fact no one is looking to be the star or MVP on the team. All the players said they feel more focused on playing together as a team, and helping each other on the field to win more games.

“I don’t really have any statistical goals or certain stats I want to reach,” Pyle said. “I just want to be able to look back on this season and say I played my heart out and did everything I could for my team.”