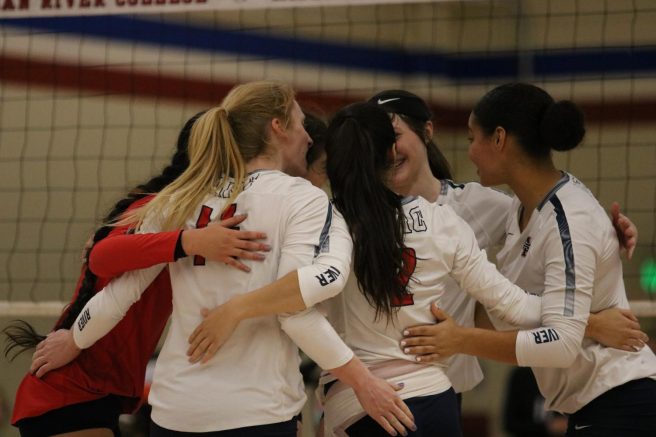 It was an intense game as both teams were ranked almost even at the beginning of the tournament, with ARC at No. 4, and FLC at No. 5.

The first set started off rough for ARC, with small mistakes like touching the net when blocking or miscommunication leading to spaces left open on the court for Folsom to score. These errors,   while minor, caused enough damage for FLC to win the set 25-20.

However the second set went better for ARC, though FLC led the match. ARC was able to catch up and take the lead and the win, 25-19.

The third set was the most contentious, as both ARC and FLC fought tooth and nail, with both teams diving to the floor for saves. However, ARC’s defense and forceful return of the ball broke through FLVs defense, with ARC being victorious 25-21.

By the fourth set, ARC really pulled together and put on a strong offensive showing. With strong attacks from sophomore Andreia Keane, ARC took a commanding lead and soundly beat FLC 25-15, winning the game 3-1.

Keane said she was happy with the win and was proud of the way her team played.

“In the first set it was very uneasy and we were not connecting very well, just because it was frantic. It’s a big game and we were just getting the nerves out,” Keane said. “But I think in the second and third set, especially the fourth, we united and played as one, and we were playing for each other.”

Head coach Carson Lowden said that focusing on strong defense was the key to winning the game.

“We focused on defense because they have a lot of good hitters, so we needed to have a strong game plan,” Lowden said.

ARC eventually lost the quarter finals of the CCCAA State Championships to Irvine Valley College in Chula Vista on Dec. 7, with a score of 3-2.

Bay area artist hopes to establish himself at Kaneko Gallery