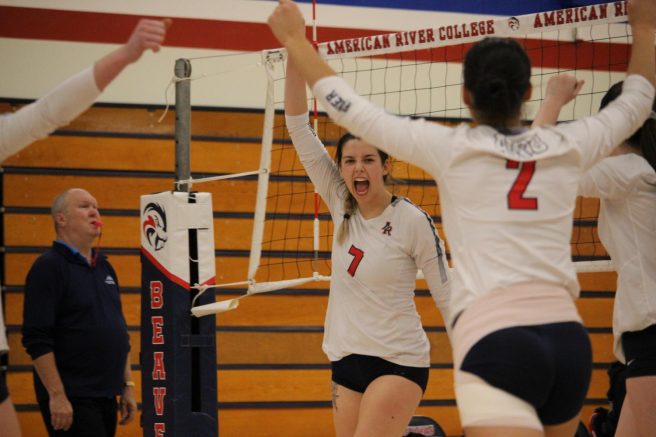 American River College volleyball player Allison Linder celebrates with her teammates during the first round of the CCCAA Norcal Regional Championships in a home match versus Solano Community College. ARC won the match 3-1. (Photo by Emily Mello)

The American River College volleyball team emerged victorious in the first round of the California Community College Athletic Association (CCCAA) Norcal Regional Championships on Nov. 26, defeating Solano Community College at home with a final score of 3-1.

During the first set, ARC and Solano engaged in a tight game, but ARC stayed just a step ahead throughout. Towards the end of the set though, ARC was able to separate themselves from Solano and win it with a score of 25-20, bringing the total score to 1-0.

In the second set, Solano managed to perform a little better. This time around, they were the ones a step ahead throughout the set, though the score stayed close a majority of the time. However, ARC pulled ahead in the end, clinching the set with a score of 25-23 and upping the total score to 2-0.

On the verge of losing the match by shutout, Solano made a strong rebound during the third set, having some of their best moments of the match. Solano eventually won the set with a score of 25-16, their largest lead at any point of the match. Since they were able to win the third set and make the score 2-1 in favor of ARC, Solano extended the match and earned one more chance to turn it around.

After a rough third set for ARC, they re-established themselves nicely in the fourth, leading Solano for most of the set. Towards the conclusion of the fourth set, ARC increased their lead even further and were able to make it to 25 points to seal the game and the victory.

Head coach Carson Lowden and her team have been adept at making adjustments throughout the season, which is something they have worked on regularly during practices. Lowden believes those adjustments were the key to victory that night, especially after a difficult third set.

Sophomore player Allison Linder, who was recently honored as All-State and third team All-American, said she believes that the crowd support at home also helped carry them to victory. To accommodate the substantial spectator turnout, the match was set in the big gymnasium that hosts ARC’s basketball games.

“We have never played in this gym, we moved over here just so we can have more fans, bigger bleachers and more support,” Linder said. “I think it came down to that support [coming from the fans], from our bench and from each other, and facing that adversity and just coming together.”

Despite coming into the match feeling a little ill, Linder managed to play through the entire game and help the team to victory.

“I’m a little sick right now, so hopefully I am little healthier going into the next game,” she said.

She also said she feels that preparation for this match could have been better, but still realizes that scouting is a little bit more difficult during postseason.

“I think that we could have prepared a little bit more for Solano, because we don’t figure out who we are playing until like two days before [the game].” Linder said. “We could have done a little more scouting to know what we were walking into, but I think we did a pretty good job.”

ARC will compete in the next round of the CCCAA bracket against the winner of Folsom Lake College’s (No. 5) match against Foothill College (No. 12) on Nov. 30, also at home.