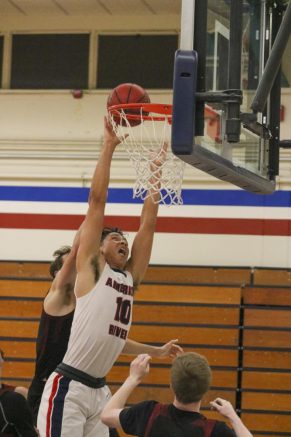 It’s that time of year again, as the American River College men’s basketball team gears up for another season. Mark Giorgi, ARC’s basketball coach for the last 21 years, said he is excited about the new season but the team has undergone many changes since the last.

“It’s an unsure feeling right now,” Giorgi said regarding his predictions for the upcoming season. Giorgi said last season the team did very well and finished 16-11, but they lost in the regional final competition.

This semester, the team consists of all new players, which has led to some uncertainty from Giorgi.

“We are kinda scattered because we only have one returning player, we have a bunch of new faces, new guys and we are still unsure how they’re going to play together,” Giorgi said.

The only returning player, Omari Rock, will redshirt this season according to Giorgi.

“Sac City usually is [our biggest competition] because they’re in our district, they have a really solid team,” Giorgi said.

He also said his outlook on this season is confident, but he’s still apprehensive about the number of new players.

The team has been practicing since the beginning of the fall semester, with their first game at home on Nov. 7th against the College of the Redwoods.

According to Giorgi, small forward Chris Cagle is one of the top players on the team this season.

Cagle says he is excited to be a part of the team and he’s ready to start the new season.

“I think we can do really well if everything comes together, I mean lord willing,” Cagle said. “[I’m] looking forward to what the guys are going to do and I think we can have a really good season.”

Cagle says he will have a better sense of the team’s ability to play together and how this season will turn out after the first game.

“I think we can go deep, It’s just going to be seeing how things go in the season,” Cagle added. “After our first game, we’ll get a gauge of where we are at. ”

Giorgi said his other choice for top player this season is guard Jashon Lewis. Lewis transferred to ARC from Yuba College last year.

“I redshirted last season, so this is my second season here, but my first season playing,” Lewis said. “I’m excited [about the new season]. I had to sit out a season last year, so I am coming back with a vengeance.”

While the team is full of new players, Cagle and Lewis say they are keeping their outlooks positive about the upcoming season.

“We are hoping in preseason [that] we figure out who we are, find out who we are, so by the time we get into league we can at least compete, but we are thinking probably middle of the pack for conference,” Giorgi said.

Opinion: Free printing would be more valuable to student success than free condoms