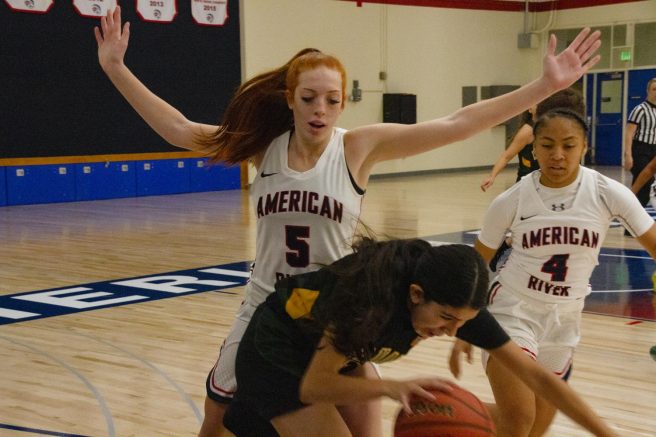 The American River College women’s basketball team opened their 2019-20 season with a home game against Napa Valley College Storm on the night of Nov. 14. The Beavers washed the Storm out with an ending score of 89-44.

The Napa Valley Storm consisted of only eight players total, giving them only three subs the whole game, whereas ARC had an advantage with a full bench. 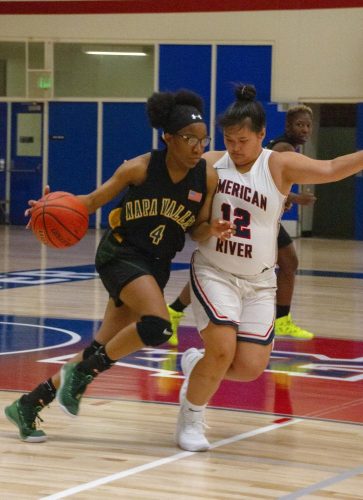 American River player Lindsey Yep guards a Napa Valley player as she drives down the court during the first game of the season on Nov. 14, 2019. ARC dominated the game, 89-44. (Photo by Jennah Booth)

The Storm won the jump ball, resulting in ARC getting right to its defense. ARC began applying pressure while forcing ball handlers to their weak-hand side, collapsing their opponents into a trap. This high intensity defense resulted in many turnovers by the Storm, along with several timeouts called in the first quarter by Napa’s head coach Paul Debolt.

“Starting off with the trap definitely set the tempo. We were aggressive, so it definitely made the other team rowdy and play to our level,” ARC freshman guard Anthonya Sanchez said.

The Beavers didn’t back down going into halftime, applying their full-court press on the Storm, capitalizing on turnovers and weak ball handlers.

With a 30-point lead well into the third quarter, ARC eventually fell back to a man-to-man defense. When necessary on offense, the team rotated the ball around, giving each player a touch. 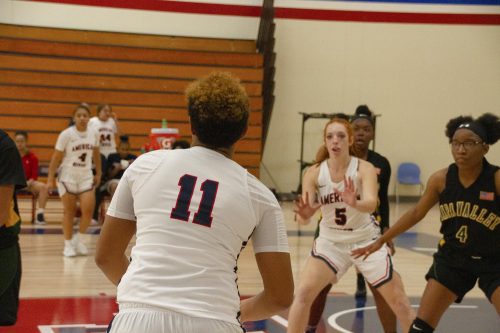 American River College player Kaili Udoffia searches for a teammate to pass to during the season opener against Napa Valley on Nov. 14, 2019. (Photo by Jennah Booth)

“I think today we played a lot of ‘team basketball’ rather than individual,” ARC freshman leading scorer Jordyn Hilliard said.

Hilliard ended the game with 30 points, followed by Sanchez as the second leading scorer with 17 points.

ARC finished off the game how they started, ultimately resulting in a 45-point victory against Napa Valley.

Sanchez says she believes that the chemistry between the team plays a key role in her confidence for the coming season.

“We have great communication on and off the court, and we work together,” she said. “We have mad love for each other and I’m really confident in our performance this year.”

The Beavers will face the Folsom Lake Falcons in the first conference game of the season at ARC on Dec. 24 at 1 p.m.