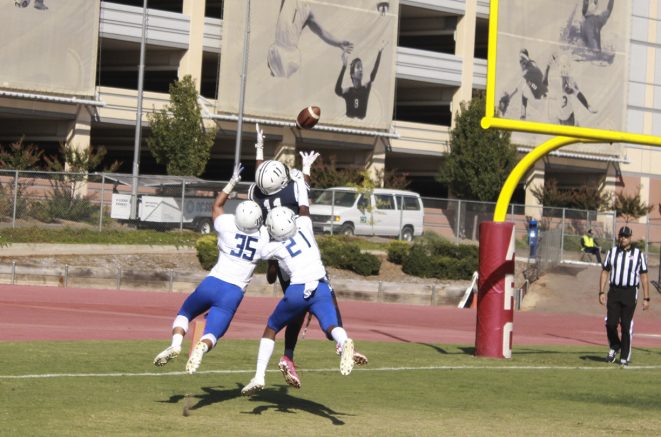 American River College’s wide receiver, Naequan Parker goes for a crucial touchdown to help his team get on the scoreboard in the game against Modesto Junior College on Sept. 28, 2019. ARC lost the game 38-20. (Photo by Brandon Zamora)

The American River College football team came up short in its game against the Modesto Junior College Pirates at Beaver Stadium at ARC on Sept. 28. The final score was 38-20 with ARC suffering its second loss of the season.

ARC had a very rocky start to the game after going three and out on its first possession and then allowing Modesto to score a touchdown on an eight-play drive that went for 76 yards. All of this happened within the first five minutes of the game.

The Beavers would eventually get on the scoreboard after quarterback Marco Baldacchino ran for a 70-yard rushing touchdown, making the score 17-7 at the end of the first quarter with ARC trailing behind.

That was the only highlight for the offense that ARC had all game until late in the fourth quarter, where it was too little too late for them to really make a comeback. Modesto was just too much for ARC to match up against.

Baldacchino had a total of 149 rushing yards, while the rest of the team only had a combined total of 24 rushing yards between six others players on the Beavers. As well as going 13-31 on passing attempts, Baldacchino threw for 221 yards and two touchdowns. But Baldacchino said he wasn’t happy with the outcome of the game.

“We didn’t execute as we should,” Baldacchino said after the game. “We need to put the ball into the endzone – [we] can’t win games just trying to kick the ball.”

As Modesto continued to light up the scoreboard, frustrations on the ARC bench began to rise,  as the sounds of slamming helmets on sideline benches and F-bombs were dropped by players on the sidelines.

Things looked like they were about to go ARC’s way at the start of the second half when defensive back Duquan Broadnax picked off Modesto’s quarterback Brett Neves in the endzone. Then on Modesto’s next drive, ARC’s defense forced a fumble, which was recovered by defensive back Jamie Cousey.

Jon Osterhout, head coach of the ARC Beavers, said he felt that if his team were to capitalize on those two turnovers, they could’ve had a chance to change the outcome of the game.

“We had two takeaways defensively but we didn’t put the ball in the endzone,” Osterhout said. “We put those balls in the endzone and it’s a different game.”

Despite the tough game, the team still tried to look at the positives from this matchup with Modesto. Osterhout said he was pleased with the way his team kept trying to make a comeback and score as much as they could at the end.

“We played the game until the end,” Osterhout said. “It’s not the end result we expected, but I was proud of the way we continued to compete.”

Even some players from the Beavers still feel that despite the loss, they can recover from this game moving forward with a little hard work.

Wide receiver Markel Quinney said he still feels his team can finish the season with a winning record despite losing two hard games in a row.

“We got to practice harder and work on our game plan,” Quinney said. “We’re going to get it next week.”

Quinney had two receptions for 22 yards and one touchdown in the game against Modesto.

The ARC Beavers fell to 2-2 in the season so far. Their next game will be on the road against the 3-1 Fresno City College Rams on Saturday, October 5 at 5:00 p.m.

ARC Professor reads from his new book, “The Animals”

Be the first to comment on "ARC football faces consecutive losses"