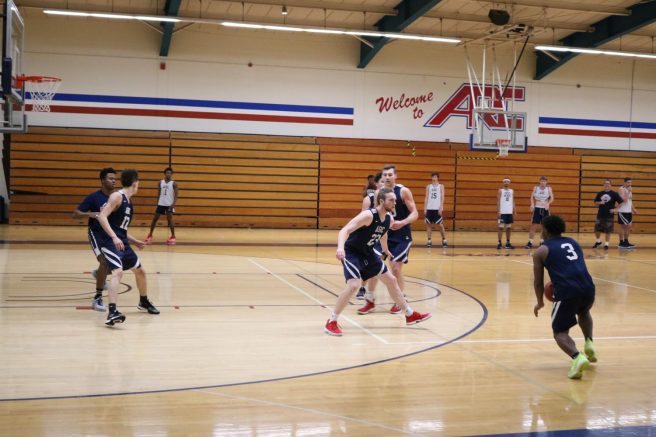 American River College players look on during a three-on-three scrimmage at practice at ARC on Feb. 6, 2019. (Photo by Anthony Barnes)

The American River College men’s basketball team is coming off a strong 2018-2019 campaign as it heads into next season.

The Beavers finished last season with a record of 16-12, advancing to the second round of the NorCal Regional Playoffs where they were eliminated by the Gavilan College Rams.

Three members of the Beavers were recently rewarded for their individual play with scholarship offers to four-year universities.

Forward Pim Lewis recently signed with Simpson University, which is located in Redding, California. Lewis is originally from Redding, said he felt it was a natural fit. Lewis said he learned a lot during his time on ARC basketball team.

“ARC helped me get great college experience by playing in one of the strongest conferences in the state,” Lewis said. “The coaching staff taught me how to handle pressure in tough situations and how to become a better player in general.”

Forward Parker Haven will sign to Menlo College in Atherton, California. Haven was recruited by Menlo College in the middle of his sophomore season and is looking forward to a new challenge.

“I hope to bring toughness, grit and rebounding,” Haven said. “I’m going to play hard and do all the little things.”

“Coach [Mark] Giorgi, coach Mike [Lorente] told me to rebound and play hard,” Haven said.  “Being a big presence was something that they always pushed me to do.”

Giorgi talked about the impact some of the players signing to schools had on the season and the values they brought to the team.

“Jermaine’s leadership as a point guard, Parker his freshman and sophomore year were top ten in rebounding in the state,” Giorgi said. “Pim is one of those guys who’s a really good student and works hard at practice.”

Guard Jermaine Henderson, who recently committed to Southwestern Christian University, talked about what made the ARC basketball program stand out during his tenure.

“ARC prepared me like no other. A lot of players and coaches out of high school felt I should of went to a national juco for more exposure,” Henderson said. “What separated ARC from a national juco [junior college] is the grind and grit you have to have to get out.”

Henderson also said his background growing up played a role on his decision to sign with his new team.

“Basketball and school are literally my only way out of where I come from and my mom can’t pay for me to go to college on her own,” Henderson said. “I had to take matters in my own hands and get this scholarship. That’s why I play as hard as I do, because she has taken care of me for so long, it’s about time I repay her.

Despite losing three key players, Giorgi says that the goal for next season remains the same and make the playoffs. One factor that will help is experience for the returning players next season.

“When they come back as sophomores things change, there’s no freshman curve,” Giorgi said.  “We have six guys that were playing at either a four year school or another junior college. If we get those guys back we should be better than we were last year.”