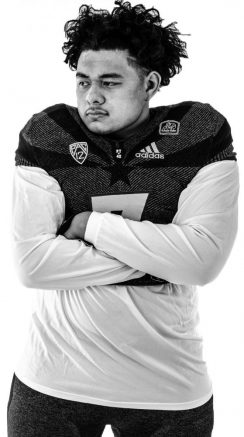 Freshman defensive lineman T.J Pesefea played just nine games for American River College while completing his goal to play one year at a community college and transfer to a Division I school. (Photo courtesy of T.J Pesefea)

For many community college athletes, transferring out of American River College after only one year is a goal that can be difficult to reach. It’s reality, however, for football player, Tautala Pesefea — or ‘TJ’ for short.

As a 6-foot-4 defensive lineman out of Foothill High School graduating in 2018, Pesefea initially earned Division I scholarship offers from nearby California State University, Sacramento and University of California, Davis. He took recruiting trips to both colleges, then decided to enroll at ARC instead.

“After all me and my family had been through, I felt like I could do better than Sac State or Davis. And that’s nothing against their schools or what they do or who they are as programs, it’s just, I took a bet on myself, I believed I could make something more of myself,”  Pesefea said.

Pesefea completed one full year at ARC before being recruited by Arizona State University for the upcoming fall semester. According to Pesefea, the journey has been fulfilling.

As a freshman for ARC, he tallied 17 tackles in nine games, including 1.5 tackles for loss and one sack.

A full academic qualifier out of high school, Pesefea is expected to be immediately eligible and will have three seasons of eligibility at ASU.

“Out of high school I had other college offers but I took a bet on myself and told my family that it would take one year at ARC and I just followed through,” Pesefea said.

Jon Osterhout, head football coach at ARC, coached Pesefea and says his athletic ability and his efforts in class make him an all around athlete.

“TJ is a tremendous football player that’s got a lot of potential, he has tremendous size and athletic ability,” Osterhout said. “He takes his classwork seriously and is everything we look for in a solid football player.”

“I visited ASU and just kind of knew that that was the school for me, I wanted to transfer to a school that would help me academically and also challenge me on the field.” Pesefea said.

According to Pesefea, his journey at ARC was short; it changed him as a person and as a player.

“I didn’t know what to expect when I came here but I’ve enjoyed my time at ARC, I feel like I’ve learned a lot from my teachers and coaches and even my teammates,” Pesefea said “I consider myself blessed that I was able to transfer after only one year.”