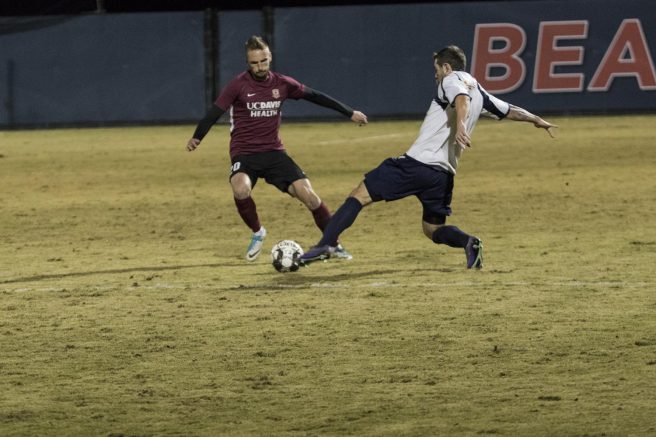 During the pre-game warm-ups, the visibly cold athletes on the field tried everything they could to get warm. Some were running laps around the perimeter of the field, while others were hiding as many of their limbs as possible inside their jerseys. With the temperature reading 49 degrees with a steady rain, both teams were ready to begin the proceedings by 7 p.m.

The scrimmage still managed a decent turnout, with relatives, family and fans of both teams coming out to support their players. The proceeds from ticket sales went to both the men’s and women’s soccer teams, so the coaches of both teams were in attendance as well, and said they were delighted at the game’s turnout.

“Three years ago we were approached by the Sacramento Republic and the Sacramento Gold [about hosting a scrimmage],” said the head coach of ARC women’s soccer team, Paul Arellanes. “All of the ticket sales and proceeds go to the athletic department here [at ARC], with most of that money going towards the men and women’s soccer programs.”

The 90-minute game got off to a tentative start, with both teams trying to adjust to the weather and get warm. Then, 11 minutes into the game, forward Cameron Iwasa scored the first goal for Sacramento Republic.

Iwasa’s goal was the only one scored by either team by the time the first half concluded, as both teams struggled to get their offenses going. After 45 minutes of play, Sacramento Republic was out in front, 1-0.

This time, a completely different lineup hit the field, for both teams. Although this was supposed to be just a scrimmage, the play was intense, as some players on both squads were trying to make the final roster for their respective teams.

In the 78th minute, midfielder Hayden Partain scored the fourth goal, and with 12 minutes to spare, the Sacramento Republic seemed to be cruising to a lopsided victory. However, Englishman Tyler Blackwood had different plans in mind, scoring the fifth and final goal of the game with nine minutes remaining.

After 90 minutes of competition, the game finally concluded. Simon Elliot, a former player and team captain for the New Zealand national team, now head coach of the Sacramento Republic, was pleased with the performance of his team, but acknowledged there is still much to improve upon.

“It was a good test, Sac Gold is always a competitive team,” Elliot said. “Of course there’s still things we need to improve on. But we saw some promising stuff, and I’m glad we scored some goals.”

When it comes to how ready the team is for the season, Elliot said he believes “it’s too early to tell.”

Partain, who scored a goal towards the end of the game, viewed the terrible weather in a positive light, citing that the conditions can be a good test for him and his team.

“Looking at this upcoming year compared to last year, I think we found a way to put a dagger in the wound and put the game away,” Partain said. “With these [weather] conditions, getting on with it and finding a way to win is very important.