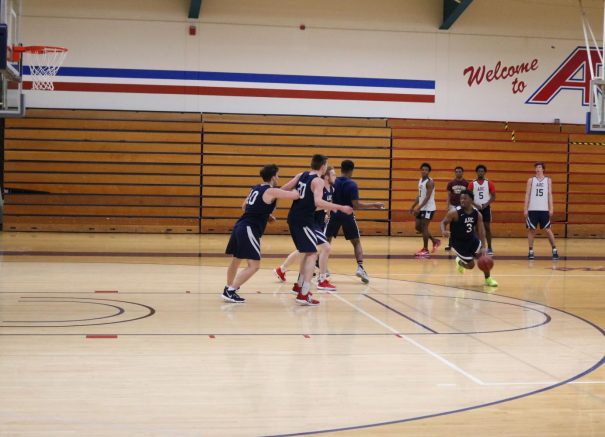 Guard Jermaine Henderson drives to the basket during practice at American River College on Feb.6, 2019. (Photos by Anthony Barnes)

After a season high five-game losing skid, the American River College men’s basketball team is coming off a two-game winning streak and are hoping that this momentum can carry them into the playoffs.

The team is coming off a 24-point win over Diablo Valley College on Feb. 5 and now have their sights set on the playoffs. Head Coach Mark Giorgi talked about what it could take to make the postseason.

“It’s going to be where we finish in conference, we would definitely be in if we finish in the top four,” Giorgi said.

Coach Giorgi also expressed that taking care of home court would be key in closing out the season as well.

“We have four home games and two away, we’re trying to win those four at home for sure.”

Giorgi said the team has a simple goal as the season winds down.

“Just win. We’re just trying to get to the playoffs and then anything can happen.”

Sophomore guard Thomas Edwards spoke on the five-game losing streak and what caused them to slump.

“We weren’t clicking, we weren’t playing together as a team like we normally did in the first fourteen games of the season,” Edwards said. “Our attitude and our team chemistry was out of sync”.

Despite that stretch, Edwards expressed optimism for the remaining games of the season.

“I feel confident, we have enough guys that are healthy to get the job done,” he said.

“We came together and figured out what we needed to do, switched things around and figured it out,”” he said.

Rivers also noted the teams style of play had improved as well.

“Were starting to move the ball like we used to and being a lot more selfless, hopefully we can get a few more going.”

The Beavers are currently 13-8 and will be seeking their fourteenth win of the season on Feb. 8 in a road game at Modesto. The Beavers next home game will be Feb. 14 against Santa Rosa at 7:30.