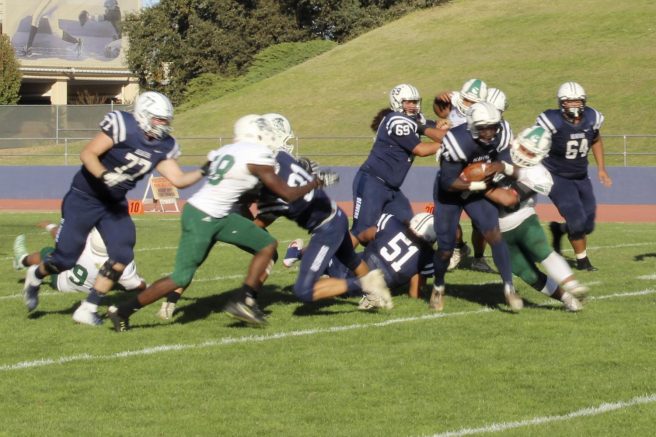 Vonathon Allen, running back for the American River College football team, attempts to rush the ball in the fourth quarter against Shasta at Beaver Stadium on Nov. 3, 2018. (photo by Christian Sutton)

After a lackluster first half, the American River College football team earned its fifth win of the season, one week before its final game.

Shasta College scored 17 points in the first half before the Beavers’ defense shut them down the entire second half. The Beavers’ offense also came alive in the second half and scored 23 unanswered points.

The Beavers were off to a rocky start in the first half. Shasta scored first when kicker Junior Gonzalez kicked a 33-yard field goal in the first quarter.

ARC didn’t score its first touchdown until late in the first quarter, when Beavers quarterback Marco Baldacchino completed a 42-yard pass to wide receiver Nate Thomas. This touchdown made the score 7-3.

Early in the second quarter, Shasta’s quarterback, Hoku-Lani Wickard, connected with wide receiver Karnell Collier to get an 8-yard touchdown pass, which made the score 10-7.

Baldacchino responded in the next series with an 81-yard touchdown pass to wide receiver Eric Davis Jr., which made the score 14-10.

By the end of the first half, ARC held led a slim lead of 21-17. They kept their lead because of a touchdown pass by Baldacchino to wide receiver Naequan Parker.

Defensive lineman Nikko Thomas said the players started doing their job in the second half instead of playing as individuals.

“We definitely came out slow [and] I don’t know what that was about,” Thomas said. “The first half is not how AR plays ball. But [in] the second half, we came together and showed what we can do.”

With five minutes left in the third quarter, Beavers’ linebacker Chimobi Nwokocha intercepted a pass from Shasta’s quarterback and returned it 5 yards for a touchdown, which brought the score to 30-17.

Head football coach Jon Osterhout said that the defense made the win for ARC.

“Once we settled in defensively, we started playing better,” Osterhout said. “The score on defense was a huge score and it solidified and kept the ball game going.”

Later in the third quarter, Baldacchino connected with wide receiver Brandon McCarter Jr. on a 36-yard touchdown pass that made the score 37-17 heading into the fourth quarter.

By the fourth quarter, backup quarterback Jacob Cruz passed to receiver Drake Owen for a 10-yard touchdown pass that solidified the Beavers’ win, 44-17. In addition to the big plays made by the Beavers’ offense, the defense didn’t allow Shasta to score a point in the second half.

Defensive end Jordan McMiller credits the victory in the second half to the coaching staff’s encouraging message about focusing on their tasks and doing their jobs. McMiller said this outlook should help them go into next week’s final game against Feather River.

“If we continue [our] second half plays going into next week and go out with energy in the first half of [next] game, we will be able to execute and play against a good opponent,” McMiller said.

The last game of the season will be at Feather River College on Nov. 10.

Be the first to comment on "ARC Beavers crush Shasta in second half, 44-17"