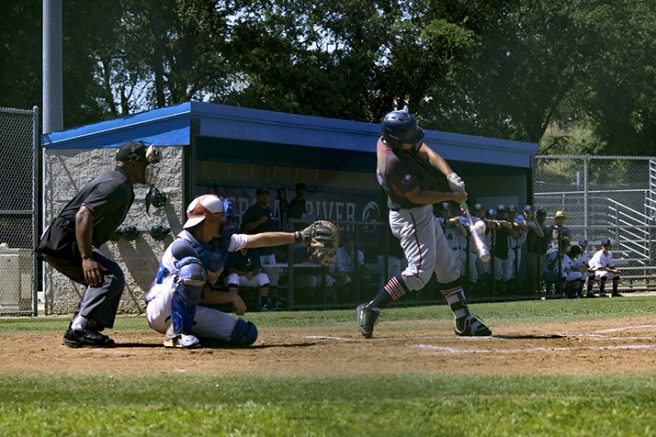 A Galivan baseball player swings at a ball during a game against American River College on April 24. ARC won 18-11. (Photo by Michael Pacheco)

The American River College baseball team scored a victory over Galivan College, winning 11-18 in the last game of the season on April 24.

Gavilan started the first inning with a run, with the Beavers scoring a run of their own in the bottom of the second inning off a hit from shortstop Lane Field.

In the third inning, Gavilan got a run after a walk with the bases loaded, to which the Beavers responded with three runs of their own, followed by another run in the fourth inning.

The Beavers loaded up the bases in the bottom of the fifth, leading to runs from Field and second baseman Christian Murua, followed by two more runs off of a hit from third baseman Will Floyd.

Shortstop Matt Clarke, who is moving on to University of Colorado in Colorado Springs, noted that despite this shortcoming, the team did not lose focus.

“We made a couple of mistakes but for the most part I felt like we were pretty much in control,” Clarke said. “We had one bad inning, but other than that we kept pressing on.”

Far from a clean win, but assistant coach Preston Vancil said he was overall content with the team’s performance.

“Anybody that was here for nine innings got to see a pretty sloppy college baseball game, unfortunately,” Vancil said. “At the same time, I’ll take a sloppy win over a clean loss any day of the week.”

The Beavers end their season with an overall record of 14-25, finishing 8th in the Big 8 with a conference record of 8-16.