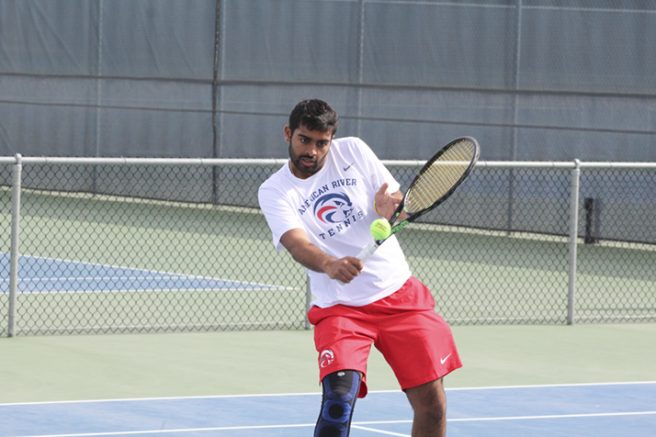 While a good start is always nice, it’s the end result that matters the most. And that’s the approach American River College’s men’s tennis team is taking this season.

The team has established itself as a tennis powerhouse by winning the last six Big 8 conference championships, winning its third straight Modesto Junior College Invitational, and starting this season 6-0.

According to coach Bo Jabery-Madison, the team still needs to work hard if it wants to get over the hump at the end of the season.

“The start has been good so far,” Jabery-Madison said. “We had some scrimmages against some 4-year schools to start with which got us used to high level competition.”

Jabery-Madison indicated that three of the non-conference games scheduled for this season will be some of the most important to the group.

“De Anza, Foothill and Chabot. The level of play is substantially higher as far as Northern California teams,” Jabery-Madison said. “SoCal has a lot of good teams that we’ll have to face if we want a run at the state title.” 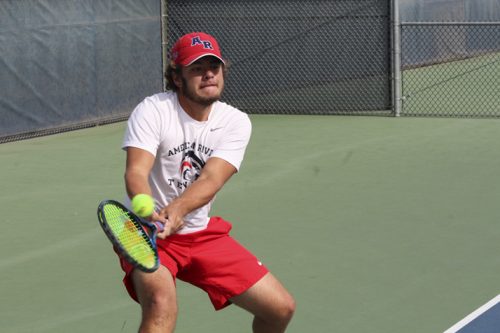 Sophomore Pete Gibson believes that they have to improve beyond their current level of play.

“To win [the state championship], I would say that we have to continue to get better,” Gibson said. “We’re gonna see the SoCal teams that we have to play and we have to be able to elevate our game to that level.”

De Anza was indeed a tough game for ARC, and while the final score shows an 8-1 win for the Beavers, most of the singles matches were highly contested games that went down to the wire.

“It was probably the closest 8-1 in the history of college tennis,” Jabery-Madison said. “Every match was a dogfight and we were able to come out on top of them.”

Freshman Paul Bhatia won his match in a third set tiebreak 5-7, 6-2, 10-8, and conceded it was difficult playing non-conference opponents.

“I played well,” Bhatia said. “Definitely could’ve played better but my opponent played well, he brought his everything today and the match went down to the very end. They bring a different type of energy, they want it as bad as we do. It’s just a great physical match.”

In addition to getting the results they need, the team’s players have also built a strong relationship with each other, and have a culture built for success.

Bhatia said that his teammates are great at showing their support for each other when they’re on the court.

“It means the world to know that every time I step on the court I got the greatest group of guys cheering for me and [the coaching staff] having my back,” Bhatia said. “It’s a great culture and I wouldn’t want it any other way.”

This year, the Beavers have two ex-players serving on the coaching staff in brothers Adam and Cody Duong, both of whom have helped the program reach its current heights.

Jabery-Madison said that is extremely beneficial to have them on staff for this season.

“Adam and Cody are awesome. They understand our culture, how we do things, and they pass that along to the guys,” Jabery-Madison said. “They know the game very well. I trust them as much as I trust myself when they’re talking with the guys so it’s an unbelievably valuable thing to have assistants like that.”

The Beavers’ next game will be against Foothill College on March 3.

Discounts and giveaways at CAPSS Suit Up Event

Sanders rallies invoke an age past