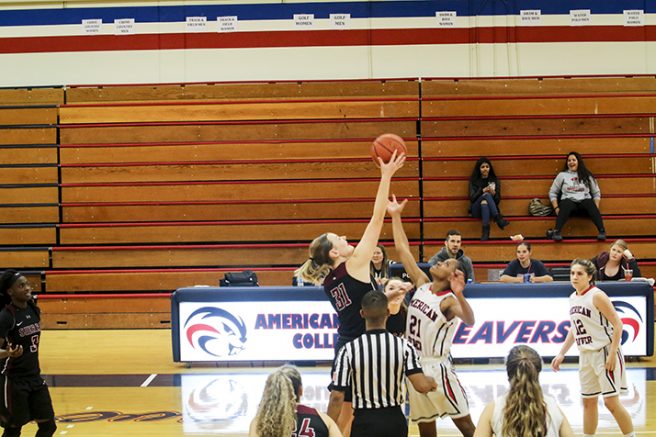 After their previous loss against the Sierra Wolverines, the Beavers were able to achieve a team triumph against the Folsom Lake Falcons with an final score of 78-61 on January 26th.

Winning the jump ball, the Beavers came out offensively with high intensity, starting the game off with a three-pointer on the boards, shot by guard/forward Jasiah Sufi.

Although the Beavers struggled defensively at the start of the first quarter, receiving two team fouls within the first few minutes, their full-court press break helped them gain momentum in response to the Falcons’ turnovers.

With the Beavers in the lead by just one point at the end of the first quarter, the Falcons started off the second quarter with quick feet. Guards Myranda Bezak, Abby Malekos, and Faith Wilson moved the ball and attacked well offensively forcing the Beavers to step up their defense.

But, even though the Beavers had a 10-point lead at halftime, that didn’t seem to provide a sense of comfort for the team.

“A 10-point swing, even in a quarter, is nothing. I don’t feel comfortable having a 10-point lead unless there’s two minutes left in the game,” said Friday night’s leading scorer, Kesler Johnson.

The fourth quarter involved a lot of power and force at both ends of the court. Falcon’s number 14, Faith Wilson, came firing shots in the fourth quarter determined to decrease the lead against the Beavers, which eventually resulted in a 17-point loss for Folsom Lake (61-78).

As the Beavers gear up for the team’s next opponent, Sacramento City College this Friday, February 2, the team members say they know what to expect when going into the game.