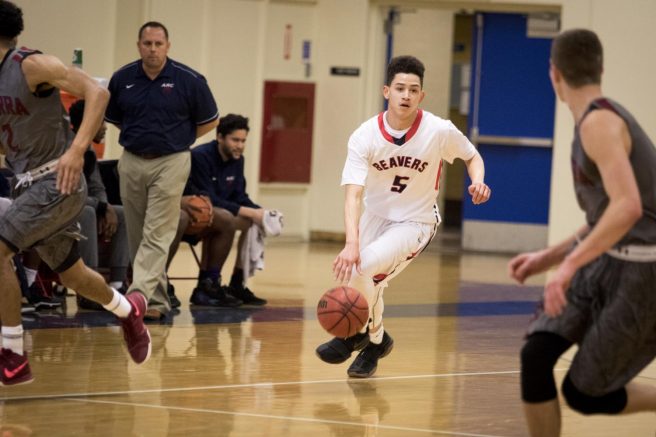 The Beavers were in control of the game early on, scoring 17 points in the first four minutes while only allowing two. Folsom Lake struggled shooting the ball and didn’t make a basket until six minutes in.

The Falcons gained some momentum back later in the first half, closing the gap to 11 points and finding a rhythm with their shooting.

ARC’s offense was led by Alex Patton and Tommy Edwards who combined for 18 first half points as the Beavers took a 12 point lead into halftime.

Both teams suffered from lack of available bench players; ARC had two substitutes while Folsom Lake only had one. Lorente said that while they are short on players, the team should be able to overcome it.

“It’s not really about the numbers it’s about the capabilities of the guys that you have,” Lorente said. “We’re short on guards right now so when our point guard got in foul trouble, that really put us in a precarious position at the end of the first half. We battled back through it in the second half but we never should’ve got that deep”

The Falcons had the momentum coming out of halftime and they showed it by going on a 14-8 run to make it a six point game. Falcons guards Isiah Maun and Zethan Dumpson led the comeback, combining for 40 points and 27 rebounds on the night.

Over the last three minutes, the Beavers struggled to score as Folsom Lake made it a one-point game with only 14 seconds left. However the Falcons missed a potential game winning shot and allowed the Beavers to escape with a 61-58 win.

Patton said that the team will take any win they can get.

“It was a very ugly win, but any win is a good win for us at this point,” Patton said. “This game we were pretty focused in the first half, but in the second half we kinda fell apart and that’s why it was a much closer game than it should have been.”

Patton added that consistency should be the team’s goal for the rest of the year.

“We’re a pretty young team so we have a lot of ups and downs,” Patton said. “We’ll play really good at times and a lot of times we’ll play pretty bad so just staying more consistent is our goal.”

American River’s next game will be at home held on Feb. 2 when they play Sacramento City.

Uber driving is a flexible option for students