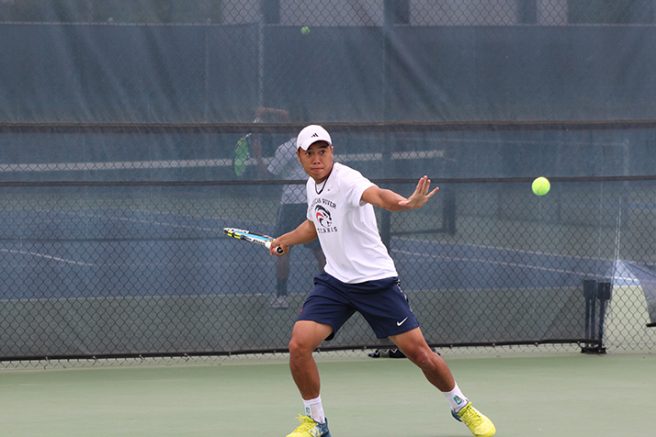 American River College sophomore Tam Duong hits the ball back across the net during a game against Modesto Junior College on Apr. 11, 2017. Duong won his match 6-1, 6-1 as ARC advanced to the semifinals of the NorCal tournament. (Photo by Mack Ervin III)

The American River College men’s tennis team breezed through Modesto Junior College 9-0 on Tuesday in the first round of the NorCal regional tournament, advancing to the semifinals for the sixth straight year.

The game was delayed for an hour as rain began to fall right before the scheduled start time of 1 p.m., forcing both teams to wait for the courts to dry before the games could be played.

Coach Bo Jabery-Madison said that weather can be a bother when it comes to scheduling, but that it’s just something you have to live with.

“You can’t control the weather so you don’t worry about it and just deal with it the best you can,” Jabery-Madison said. “As far as warming up and timing that, that can be kind of a challenge, but you just kinda do the best that you can and not let it bother you.”

Once the playing commenced however, it was pretty simple for ARC as the team took all seven games, not losing a single set along the way. 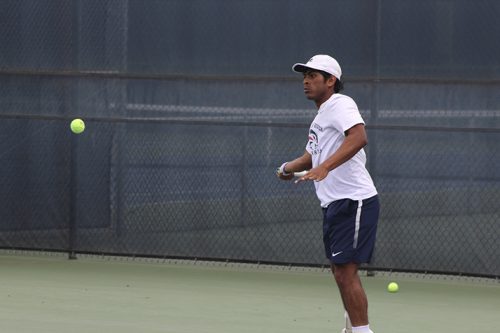 American River College freshman Neville Cooper hits the ball back across the net during a game against Modesto Junior College on Apr. 11, 2017. ARC won 9-0 to advance to the semifinals of the NorCal tournament. (Photo by Mack Ervin III)

Jabery-Madison said that while the outcome in some of these games may not have been in question, you still have to play the best you can.

Freshman Neville Cooper said that the team doesn’t feel much pressure anymore about living up to past teams and results.

“In the beginning of the year a little bit, but as the year developed and through the matches and wins we built confidence,” Cooper said.

Jabery-Madison said that motivating this group isn’t difficult because of the reason they play the game.

Sophomore Tam Duong said that practices and coaching leads to being comfortable on the court.

“I feel confident when I practice and when I play and I love the environment here. When we listen to coach it will be fine,” Duong said.

The Beavers will play De Anza College in the semifinals on April 18.

ARC dominates Lassen in second match of the day