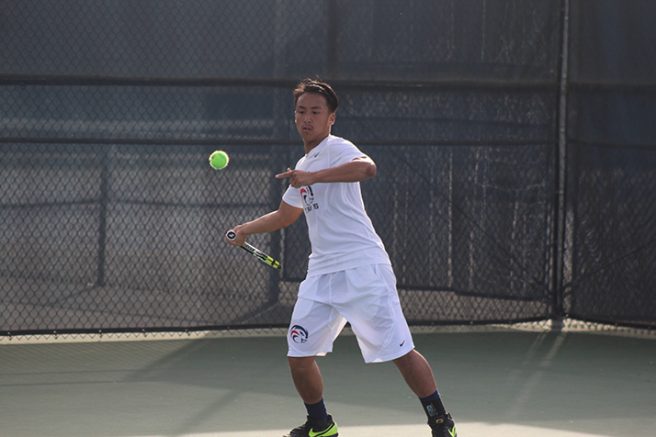 American River College’s Cody Duong prepares to return the ball during a scrimmage match against Holy Names University on Jan. 29, 2017 at ARC. Duong is one of two returners from last season as ARC look to retain their NorCal Title. (Photo by Mack Ervin III)

American River College’s men’s tennis team look prepared for the start of the 2017 season and prepared to defend their 2016 NorCal title.

After finishing last season with a 10-0 record in conference play and clinching a fifth consecutive Big 8 title, the Beavers beat Foothill College 5-2 to win the NorCal championship in April, before losing to Irvine Valley in the State Championship eventually ending with a 17-3 record.

The team only has two returning players this season in Justin Barton and Cody Duong, but its players say they  don’t think the team hast suffered as a result.

“We’re feeling pretty good with this roster,” Barton said. “We lost a lot of guys but we’re still pretty deep and they’re all good guys so it could be pretty fun.”Duong agreed with this assessment.

“I think the new roster is pretty good,” Duong said. “We have a lot of new kids but the chemistry is still there and it feels like we’re all returners. That’s the good part about this team.”

The team finished the last of its two preseason scrimmage games against Division I school St. Mary’s College and Division II school Holy Names University, before the season starts on Feb. 3.

Coach Bo Jabery-Madison said that having the team playing scrimmages against four year universities has helped it get  ready for the tough matches ahead.

“These scrimmages are definitely good,” Jabery-Madison said. “Our conference might not be this level, but if we want to do well in NorCal and State, this is the competition that we need to get used to playing because this is what it’s going to be.”

Assistant coach Patrick Johnson, who transferred to Holy Names from ARC in 2014, echoed that sentiment calling that it is a “great opportunity.”

“Most of these players are looking to transfer and it gives a chance for these universities to come out and see if any of them will fit well with their program,” Johnson said.

Both coaches say that despite their continued success and titles, there is no added pressure to perform and the game plan has stayed the same over the years.

“We don’t look at trying to win state because that’s not our goal,” Johnson said. “Our goal is to try to be on top of our classes and on top of our tennis.”

The Beavers first game of the season will take place Friday at Cosumnes River College.