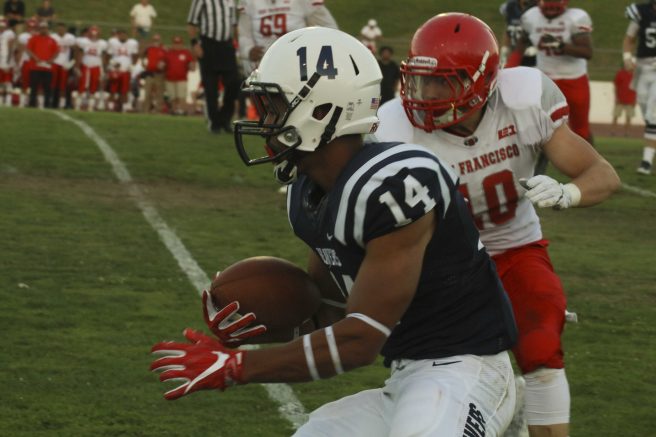 The American River College football team’s exciting start to the season has them tied for first place in the NorCal National division after a 38-35 double overtime victory over Fresno City College on Saturday.

Their last win puts them at a 3-1 record through four games this season, having them ranked 7th overall in the state and 3rd in Northern California according to the CCCRSF poll.

The game was fairly evenly matched through the first half of the game as both Fresno and ARC traded touchdowns, leaving it tied at 21-21.

A 43 yard touchdown pass, and a 9 yard touchdown run from quarterback Griffin Dahn extended ARC’s lead to 35-21 with just under 12 minutes remaining in the fourth quarter. 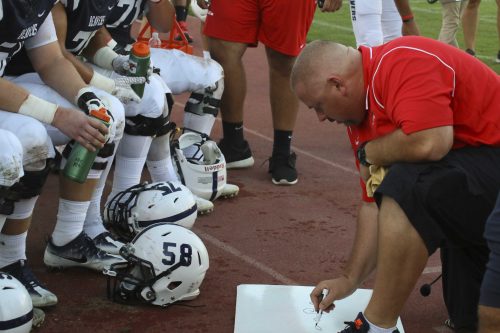 ARC Offensive Assistant Josh Crabtree draws out a play to the football players in the game against CCSF on Sept. 17. (Photo by Laodicea Broadway)

Dahn had another good showing in the game, throwing for 285 yards and three touchdowns along with an interception to bring his season total to 996 yards, nine touchdowns, and three interceptions.

Coach Jon Osterhout said the team had a good showing for most of the game despite early struggles.

“The game went really well for about 56 minutes,” Osterhout said. “We got off to a little bit of a shaky start with field position, but we settled in defensively and offensively played a good first half.”

“The last four and a half minutes of the game was bananas. We found a way to make it interesting.”

The Beavers suffered from late defensive struggles again as they allowed an onside kick recovery and two drives down the field to allow Fresno tie the game up at 35-35 with 55 seconds remaining.

With limited time remaining, ARC decided to run out the clock and take the game into overtime.

Fresno and ARC traded turnovers throughout the overtime possession, with Dahn throwing an interception in the endzone, Fresno running back Nate Jones fumbling in the red zone, and Fresno turning the ball over on downs.

The Beavers took possession of the ball on the Fresno 25 yard line in double overtime and moved the ball to the 9 yard line after 5 rushes by Dahn, leading to the game winning 27 yard field goal by kicker Max O’Rourke to win the game 38-35.

Osterhout stressed the importance of finding a way to close out games.

“We gotta find a way to finish off the game in the correct way.  That’s our job as a coaching staff to figure out and for the players to execute,” Osterhout said. 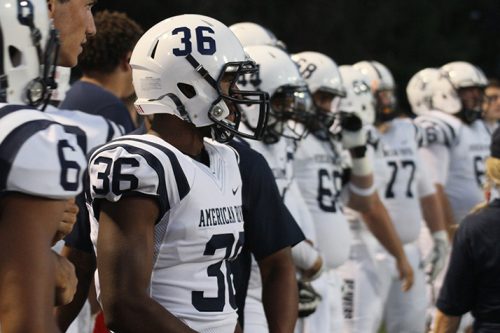 American River College defensive back Johnny Williams watches from the sidelines during a game against Diablo Valley College on Friday Sep. 1 at DVC. ARC won 23-20. (Photo by Lao Broadway)

Another thing that has set the team back is season ending injuries to the starting team, including defensive back Leonard Nelson suffering a torn meniscus, wide receiver Jacob Sipes with a torn achilles, and defensive back Chris Williams suffering a broken foot.

Osterhout said that they play high quality teams every week and the the next game is always the most important.

“At this level, all the teams are of great quality. Our mindset is the every game is a big game because it’s the next game.”

How to do Thanksgiving on a student budget