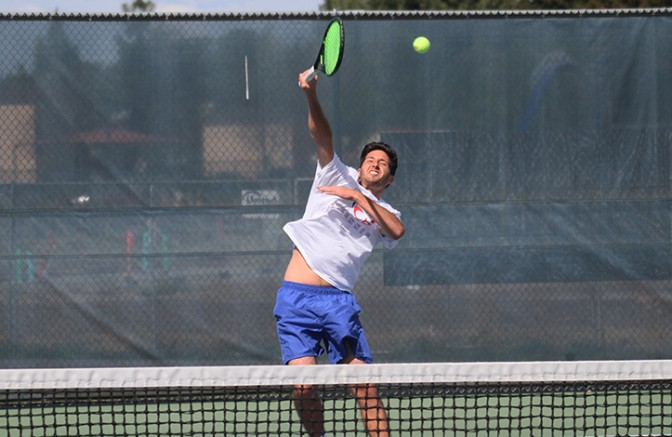 American River College men's tennis player TJ Aukland jumps up to return the ball during practice on Mar. 30, 2016 at ARC. The team will be traveling to Santa Rosa this Thursday for the BIG 8 North Conference Tournament. (Photo by Matthew Nobert)

American River College’s men’s tennis team is preparing to close out the regular season with the BIG 8 North Conference Tournament this Thursday in Santa Rosa, California.

These will be the last singles matches of the season for ARC, and will decide if they can take the singles and doubles BIG 8 North championship in addition to the BIG 8 North team championship they earned with their 10-0 record.

The tournament will only host schools from the BIG 8 North conference and out of those schools, ARC is expecting to see their biggest competition from Diablo Valley College and Foothill College, who are ranked number two and three respectively.

“DVC has always had solid players and their lineup is really deep and we got to be careful for them,” freshman player Cody Duong said.

Even though ARC is expecting serious competition in this upcoming tournament, head coach Bo Jabery-Madison isn’t feeling too worried because he knows that “we have three of the best players in the conference for sure.” 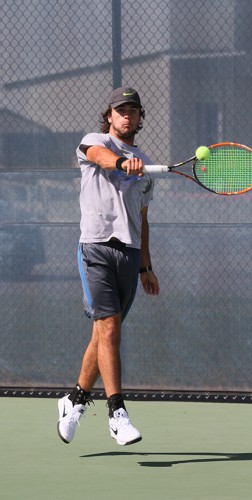 Meliuk has had a very successful season; he is currently undefeated and is looking to continue that record all the way to the end of the season.

The goal for ARC entering into this tournament and the post-season is to keep doing hard work and not letting up.

“The biggest goal for us is to be performing at our best possible level at the end of the season,” Jabery-Madison said.

The players also felt that if they leave it all out there, then they will be happy, win or lose.

Duong feels that the players are “just making it as far as we can you know, as long as we are happy with the way we play then we can’t be mad at ourselves.”

Getting ready for the post-season, each player had their own work that they need to do to become ready for what lies ahead, whether that be building up confidence or working on the little things.

“Each person is focusing on one or two aspects of their game that they feel like they need to work on most,” sophomore Seppi Capaul said.

Everybody on the team knows that if they keep working hard, keep improving and keep working through any adversity, they can beat any team on any given day.

ARC will be in Santa Rosa from March 31-April 2 for the BIG 8 North Conference Tournament and begin their post-season on April 5 with the NorCal Team Playoff, round one of three.