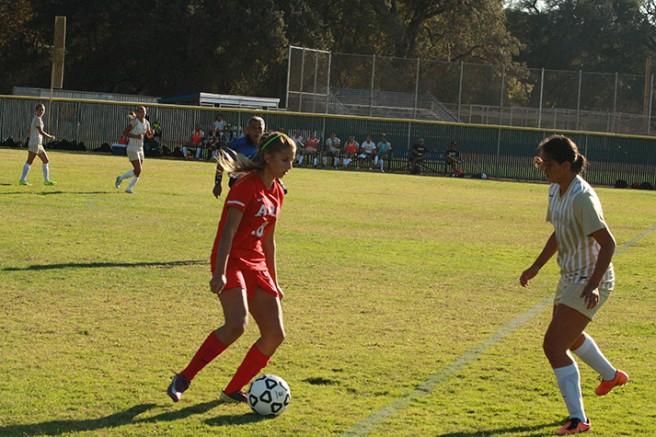 McCall Madriago, who played for ARC during the 2013-14 and 2014-15 seasons, said that when she found out she got selected, it was initially weird because she felt both ecstatic and awkward at the same time.

“Until I met the women on the team, I had never been associated with deaf culture,” Madriago said. “I have always been around hearing people, so joining the team opened a whole new world for me. Now, it’s one of the best things that’s happened to me.”

Madriago, who now plays for Humboldt State, said the process of being selected to the team smooth but difficult since she started it in 2014.

The players have to have a hearing loss of 50 decibels or more in their best ear, and then go through camp tryouts and fitness tests, which Madriago said was harder than she expected.

“I admit, my first fitness test back in 2014 did not go very well, but I have worked hard and I have passed every fitness test since,” Madriago said.

ARC’s women’s soccer coach Paul Arellanes said that it’s a great honor to see someone he coached play for a national team.

“To be selected to represent your country is a tremendous honor,” Arellanes said. “There aren’t many people out there who can achieve that.”

Madriago said that playing for ARC allowed for physical, emotional and mental growth that she probably wouldn’t have received if she had gone straight to a four-year college.

“(At ARC), I learned the different playing styles of my teammates and my opponents,” Madriago said. “I learned the expectations, the pressure and the dedication of being a student-athlete.”

During her senior year of high school, Madriago tore the anterior cruciate ligament in her right knee and had to play for ARC instead of going straight to a four-year college, according to Arellanes.

Madriago said that she remembers the day clearly and how devastating and heartbreaking it was.

“(It) didn’t affect me physically as much as it did mentally,” Madriago said. “My first season at ARC I struggled because it was a battle with what I wanted to do on the field versus what my body allowed me to do.

“I was scared to go for a tackle or cut to change directions because I was in fear of tearing it again,” Madriago continued. “It was so frustrating. However, looking back now I’m glad I went through that. It made me a stronger player, it made me think quicker and ahead of the game, and it gave me the drive to want to be better.”

Arellanes said that even when leaving ARC she had to advertise herself to scouts more than she should have.

“When she got here (ARC), she had to work hard, talk to coaches (from four-year colleges) and study film,” Arellanes said. “She pretty much recruited herself.”

Arellanes added that he had to learn how to coach her since she is deaf and said that he even contacted her dad, who he play with and against while growing up, for help.

“The hardest part was the first month or so and figuring out how to communicate with her,” Arellanes said. “After that, it was easy.”

Although already well into the process, Madriago’s spot on the final roster is not guaranteed and she will continue to compete for the months to come.