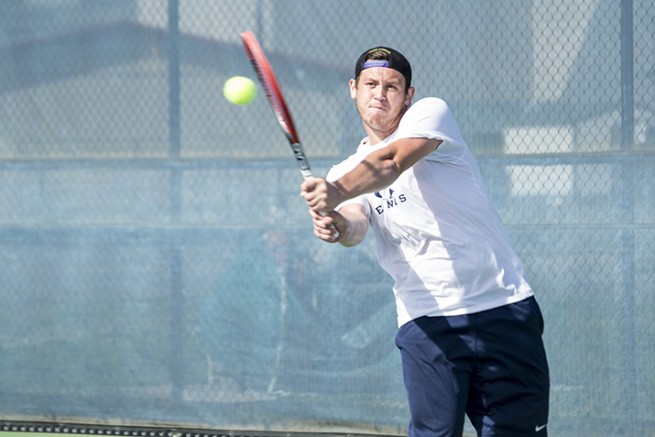 American River College's Alix Meliuk returns a serve from Folsom Lake College's Sean Alves during their match on Feb. 20, 2016 at AR. The Beavers won the match 9 to 0. (Photo by Joe Padilla)

The win puts the team’s overall record at 4-0 on the season and comes on the heels of a win at the Modesto Junior College Tournament, a first for the program.

Coach Bo Jabery-Madison thought the team played well and praised the endurance and enthusiasm of the players.

“I thought it was very good, the energy was good,” Jabery-Madison said. “From the start of the doubles to the last match I thought we played with good intensity.”

The team has only dropped two matches over the course of the season and looks on track to add its 5th straight Big 8 conference championship.

Jabery-Madison also said that while the wins early in the season are nice, they are looking towards the bigger prize.

“We don’t really pay attention to the win loss record this early in the year, we’re focused on getting better every year,” Jabery-Madison said. “Our goal isn’t to be 4-0, our goal is to give ourselves the best possible chance to play for a state title.”

Freshman Alix Meliuk said that teamwork and work ethic is a big reason why the team has been so successful.

“We work more than others, there’s a lot of training and coaching and I think we work harder than the other teams in the conference.” 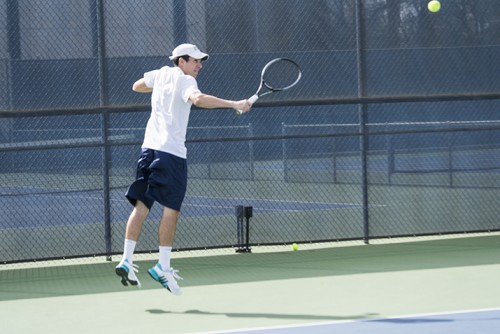 Seppi Capaul returns a serve during American River College’s tennis match with Folsom Lake College at AR on Feb. 20, 2016. The Beavers won the match 9 to 0. (Photo by Joe Padilla)

Sophomore Seppi Capaul praised the team’s togetherness and enthusiasm when cheering on teammates.

“All the guys bond with each other really well. It doesn’t matter where anybody plays on the lineup, everyone is usually pretty supportive of each other.”

Capaul also said why he thinks that tennis at the college level is better than at the professional level.

“Usually if you play individual tournaments it gets very individualistic,” Capaul said. “The college environment helps the team bond together and cheer each other on.”

Jabery-Madison said that the team’s willingness to bond and support each other is what makes college tennis what it is.

“Tennis may be an individual sport, but when you put it into a team context you’re not out there alone,” Jabery-Madison said. “You have support from your teammates and look to the next court for some support. It can improve your enthusiasm, energy, and lead to better playing.”

ARC will continue their quest for a state title on Tuesday when they host Big 8 rivals Shasta College.