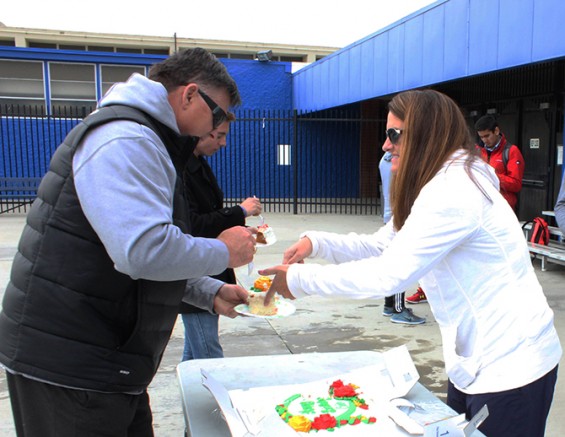 By Matthew Nobert and Noor Abasi

Water polo coaches Eric and Bethani Black share not only a a pool deck, work office and practice equipment, but also a household.

The couple have been married for 15 years, with Bethani coaching the women’s team while Eric coaches the men’s team at American River College.

They originally met at Sierra College in Rocklin, where Eric was the head coach for the men’s water polo team and Bethani was taking supplemental classes after graduating from Fresno State.

Bethani, who had previous experience with club and school swim, asked Eric if she could train with the team and their relationship developed from there.

“I noticed (there was a difference in our relationship) when she no-showed on a training day we had planned in the morning and I got mad,” Eric said. “I was wondering why I was mad and realized it was because she was more than just a friend to me.”

Eric was planning to hire Bethani as his assistant coach for the upcoming season, but Bethani had already received an offer to become head coach for the ARC swim team.

Bethani, who started coaching at ARC when she was 23, has been with the school for 20 years and the only women’s water polo head coach in the school’s history, bringing the women’s program to school in 2002.

Bethani has expressed no interest about retiring anytime soon.

“I have a six-year-old so it will be a lot longer (until I retire),” Bethnai said.  “Working with young people there is always a sense of excitement and I’m honored to be their coach.”

Eric, who had 20 years of coaching experience before coming to ARC, is currently in his 30th consecutive season coaching water polo and has been ARC’s head coach since 2005. 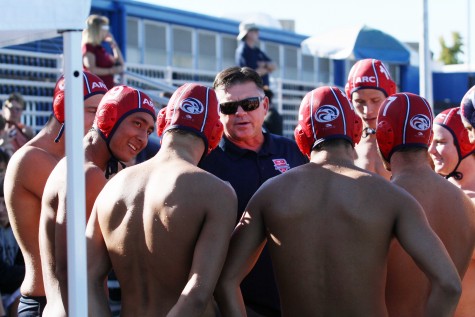 American River College coach Eric Black gathers the water polo team around as he breaks down Sierra’s defense. ARC fell to Sierra by a score of 4-3 on October 21, 2015. (Photo by Nicholas Corey)

Eric played the sport in the late 1970s.

“I went to the 1977 U.S. Nationals between Cuba and the U.S. at De Anza College and I started playing the next season,” Eric said.

“In spring of 1980, I was asked to help with a youth soccer clinic, and that was the first time I put a whistle around my neck,” Eric said. “I really enjoyed helping and teaching the kids.”

With the amount of coaching experience between the two of them, each have the ability to share knowledge and tactics are there.

“We discuss it constantly, we don’t always agree but usually do 95 percent of the time,” said Bethani.

“I have a more old school form of coaching and working with athletes, but I value her opinion as a coach and educator as a resource for both our jobs,” Eric said.

“I think it’s unique that we share an office, complex and equipment and we don’t get sick of each other,” Eric said. “It took getting used to though because we had to blend our programs.”

Both coaches like to make sure their respective teams have a working relationship as well.

“In the summer, the girls team and the boys team practice together so there’s a good relationship there (because) there’s no competition,” said Lily Van Reese, an attacker on the women’s team.

Players also enjoy the feeling of family that the coaches bring and the positive energy that they have.

“You always have a connection to one of them because they are always on the pool deck,” said Hayley Dutton, an attacker on the women’s team. “If you ask me I wouldn’t be able to tell the difference in coaching years.”