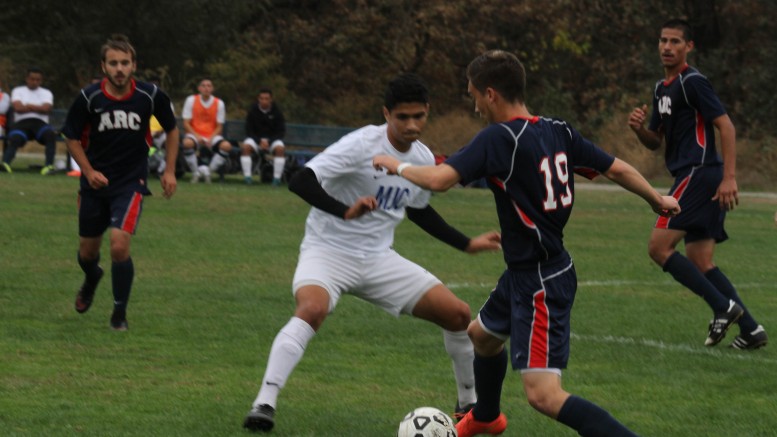 American River College defender Francisco Lomeli (19) attempts to move the ball past a Modesto Junior Collge defender during ARC's 1-0 win over MJC on Oct. 27, 2015. With the win, ARC's overall record stands at 5-10-3. (phtoto by Kevin Sheridan)

American River College Men’s soccer team got their fifth win of the season against Modesto Junior College on Oct. 27, 2015 winning 1-0 to continue their end of the season come back.

ARC has had some early growing pains this season with 24 of the 28 man team being freshman who had never worked together before the start of this season.

However over the last six weeks the team has come together and it really showed with this win over MJC.

Communication has been an issue for ARC early on this season and causing lots of turnovers, but this game there was a constant chatter from every player on the field helping ARC make those split second decisions.

“Yeah we had a good team to begin with, but we just didn’t know each other yet,” freshman midfielder Eduardo Cervantes- Magana said.

ARC had starting possession and was able to push into MJC’s side of the field but their defense was strong and got the ball out to started a back and forth with ARC that lasted for most of the first half of play.

ARC came into this game looking a bit more aggressive in it’s style of play than previous games this season, having a good amount of yellow cards pulled and a few warnings from the officials.

“It’s just how it is, early on we were the recipients but now we stepped up and got some backbone,” ARC sophomore midfielder Alex Rizzo said about the team’s changing mentality and physicality.

The only major penalty of the game came from a red card called on Modesto’s starting goalie Apram Apram when he collided with ARC’s midfielder Denlizon Puentes out of the goalie box as he  was on a possible goal making drive, knocking Puentes to the ground.

“After the red card everybody wanted to stick up for me,” Puentes said.

Even though Puentes wasn’t able to get the goal on the play in question, he was able to make a fast sideline drive down the field and scored a top corner goal in the last minute of the first half.

Puentes now has five goals on the season and leads the team in scoring.

ARC went into the second half playing just as aggressive as they were before with slide tackles and forcing MJC out of bounds, but slowed the pace a little bit and were focusing on keeping Modesto away from the goal.

ARC’s goalie Ricardo Perez-Vega had some clutch saves and midfielder Alex Rizzo continued to lead the defence with his fast and aggressive tactics. 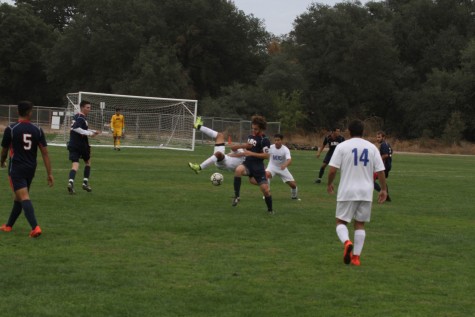 “We played 90 minutes of good defense… making growth as a team where we didn’t break down,” head coach Paul Hansen said while addressing the team at the end of the game.

The team will have it’s last home game of the season Friday Oct. 30 at 4:00 P.M. against Cosumnes River College.

“The Shepherds’ Play” begins this Friday