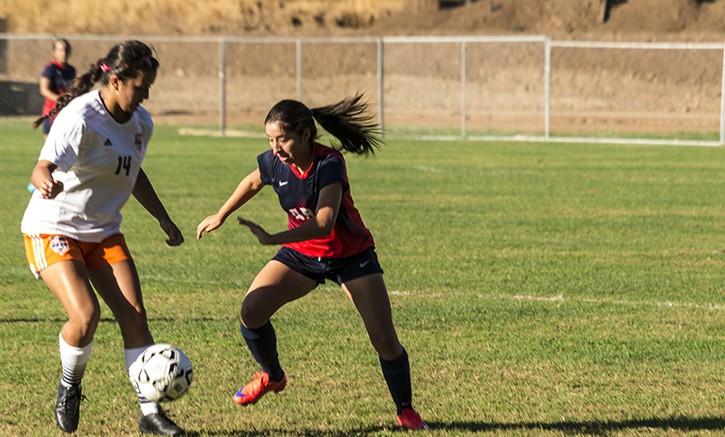 American River College’s women’s soccer team’s losing streak is now at four games after a loss to Cosumnes River College Friday by a score of 3-1.

Early on in the first half, CRC had several attempts at a deep drive into ARC territory, but were unable to convert the opportunities into points.

ARC and CRC finished the game with a combined seven yellow cards and 29 fouls.

The two teams exchanged a deep drive into each other’s territory in the game’s first 20 minutes, but CRC forward Breona Robinzine scored to give her team a 1-0 lead.

ARC was unable to sustain many drives into CRC territory, as it had many errant passes that ended up as assists.

CRC built upon its lead, as midfielder Andrea Story scored another goal at the 44 minute mark of the first half to take a 2-0 lead.

“The communication was better,” said ARC midfielder Natalie Silcox. “We’re starting to work better as a team and not yell at each other.” 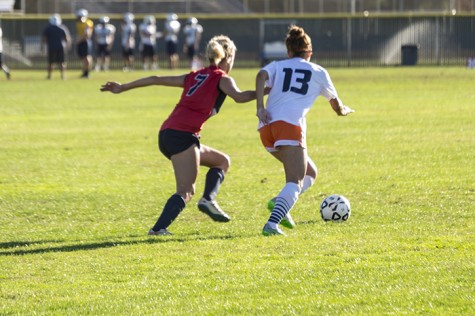 Savannah Watson of American River College and Breona Robinzine of Cosumnes River College go after the ball during their match at ARC on Oct 16. (Photo by Joe Padilla)

At the beginning of the second half, some players from ARC’s bench began asking for a card to be called after one of its players was knocked over by a CRC player.

These demands were quickly shot down by head coach Paul Arellanes who told them “We don’t go around asking for cards.”

ARC’s struggles with ball security continued into the second half, as many of its drives into CRC territory were halted by takeaways.

ARC got a spark of hope late in the second half after defender Erika Bennett scored off of a penalty kick cut CRC’s lead to two at the 72 minute mark.

Despite this, Arellanes said he sees improvement from his team.

“Our spirit and our attitude was better,” he said. “We lost (the game) all fighting for the same cause. We’re going in the right direction.”

“We’re starting to get upset we’re losing. We want to win, we just have to pull it out,” said Bennett.

ARC will play at Sacramento City College on Friday.