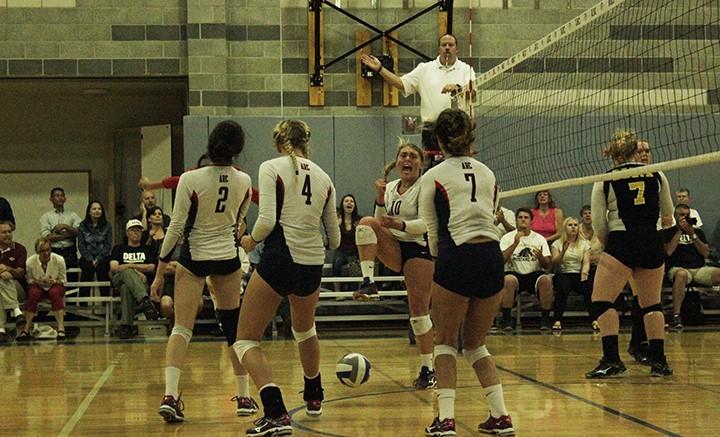 American River College’s volleyball team defeated San Joaquin Delta College at home by a score of 3-2. The game came down to the fifth and final set, in which ARC edged SJDC 15-13.

“I think we played well, especially since we were down a key player,” said head coach Gabe Gardner.“The girls really came together as a unit and I was proud of that.”

ARC won the first set 25-22 in what would prove to be a sign of the close game that would follow.

SJDC won the second set 27-25 with both teams trading shots from all over the court. ARC would go on to win the third set due largely to the play of  Meyer who finished the game with 15 kills.

“We played well. We definitely played well as a team. We played as one unit and not six individuals,” said Meyer.

In the fourth set, ARC roared out to an early 7-2 lead but SJDC weathered the storm and went on to take the set 25-21.

“They definitely gave us a run for our money, picking up balls and making smart plays but towards the end we gained confidence.” said outside hitter Nora Troppmann, who finished with 21 points and 21 kills.

In the fifth and final set, Meyer brutalized SJDC defenders with four straight kills in a decisive stretch that would prove to be fatal.

“Our hitting was pretty good,” said Meyer. “We had some rough patches in the middle but we pulled through.”

Gardner praised his team’s effort and ability to pull through.

“This was one of those grind it out kind of wins,” Gardner said. “They showed a lot of heart and poise.”

ARC will travel to 5-9 Modesto Junior College today at 6:30.

Statewide student leadership organization could have its funds frozen