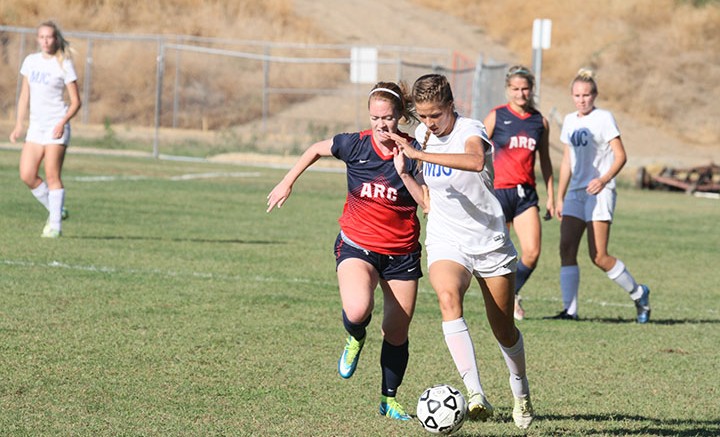 American River College’s women’s soccer team advanced to 5-3 on the season after a 2-0 win over Modesto Junior College.

During the game, ARC forward Amanda Holtzen scored a goal at the 56 minute mark of the second half to put the game out of reach and secure a win.

ARC forward Brianna Morales assisted on the scoring play, which made it her first assist of the year to go along with the three points she scored during the eight games she’s played in this season.

“(We set) a dictation of pace,” said Arellanes. “(We) had to cope with their offense early on, but we continued to play hard and counter with goals.”

And counter they did, as MJC was on the ropes midway through the second half on a goal by ARC forward Amanda Holtzen.

ARC goalie Stephanie Doss breathed a sigh of relief when she reflected on the outcome of the game, since their last game ended in come-from-behind victory for San Joaquin Delta College.

“(This game) built confidence,” said Doss, also adding that ARC’s two defensive backs were the reason for the shutout.

Doss finished the game with four save on four shots and 90 minutes played.

Cooper scored in the first half and finished the game with one goal on one shot.

ARC’s offense finished the game with three shots on goal and two made shots.

“Confident on (the) ball,” said Carrigan when explaining how Cooper is able to successful at this level of play.