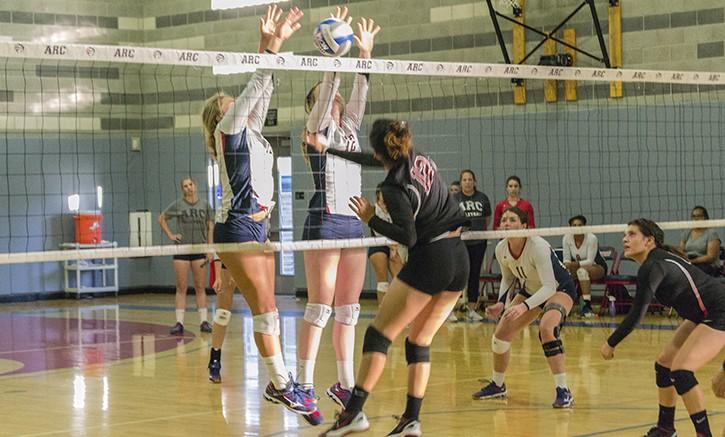 Erin Fogarty and Kaitlin Meyer go above the net for American River College to block a shot from Porterville's Ana Madrigal during the tournament match on Sept. 18, 2015. ARC won the match 25-9, 25-8, 25-13. (Photo by Joe Padilla)

By the start of the third set ARC switched to the opposing side of the court when the sun started to rear its way on to the court.

“It was so hard for us to play while the sun was in our faces,” said ARC outside hitter Katie Herrington. “We couldn’t even see the ball when it went into the air.” 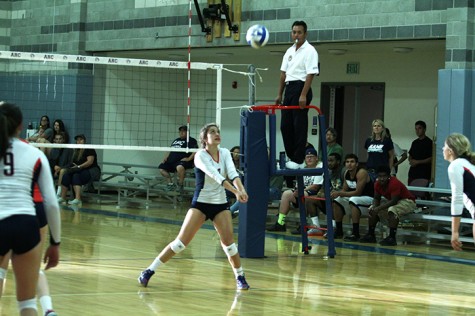 American River College outside hitter Monica Udahl sets the ball for her teammates as the volleyball team takes on Porterville College on Sept. 18, 2015. (Photo by Nicholas Corey)

Porterville started off the game fiercely with a three point lead against ARC, but it wasn’t enough to cancel out ARC’s precise teamwork.

Near the end of the first game, ARC began to assert their control over Porterville with spikes and serves.

ARC head coach Gabe Gardner discussed how the ability of stringing plays together and mindset in game are the keys to success on any level.

“Prepare to be good,” said Gardner. “Talk to yourself.”

Prior to the switch the sun began shining through the window, which made it harder for ARC to see the ball.

Porterville struggled with communication and was unable to read ARC’s point of attack during the match.

Consistent play like this will enable a win in its next double header on Sept. 26 against both Butte and Feather River.

Be the first to comment on "ARC volleyball routes Porterville"