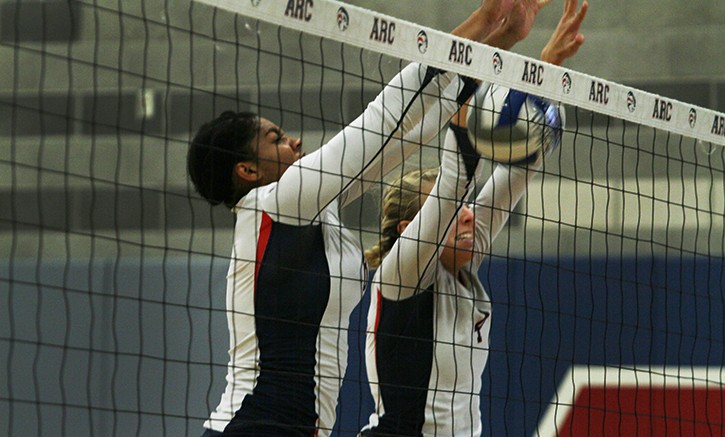 Erianna Williams and Nicole Suther, middle blockers for ARC, attempt to block a shot from Cabrillo. ARC lost three sets to two, winning two sets in a row to take the match to a fifth. (Photo by Nicholas Corey)

American River College’s volleyball team came back from being down two sets to coming within three points of winning, but was defeated in the fifth set by Cabrillo College Friday afternoon, with game scores of 25-20, 25-18, 23-25, 21-25 and 15-12.

Cabrillo (4-1), who finished second in the state championship last year, was aggressive and precise during the two opening sets, holding five-point leads in each for most of the duration.

ARC sophomore middle back Erianna Williams played against Cabrillo during her freshman season, and expected to face a fierce opponent.

“We all knew they would come out strong and give us a hard time,” said Williams.

Freshman outside hitter Nora Troppmann, who played strong throughout the game but cost the team multiple points during the game-deciding fifth set, said the team made a decision to focus harder in it’s winning sets.

“We knew we could compete with them if we played at our best,” said Troppmann.

Cabrillo came into the game ranked ninth in the state, with ARC not far behind at twelfth. ARC’s two comeback sets sent the gym into a frenzy, with visiting ARC football players fresh from a practice being particularly celebratory.

ARC was missing two players who normally see a lot of game time in sophomore libero Taylor Ladines and sophomore setter Kylie Christensen, leaving the roster at an active nine compared to Cabrillo’s 16.

First-year head coach Gabe Gardner periodically argued with referees for the game, complaining about a lack of consistency in calls.

At one point, Gardner beckoned to sophomore setter Monica Udahl, and spoke to her. She then went to the net referee and politely said, “Coach would like to know if you could be more consistent, please.”

After the loss, Gardner credited Cabrillo for making less mistakes than ARC, and said his team’s defense lacked in the three sets they lost.

The game was the first of a tripleheader, with Cabrillo playing versus the also visiting Porterville College (0-2), before ARC faces Porterville as well at 5 p.m.