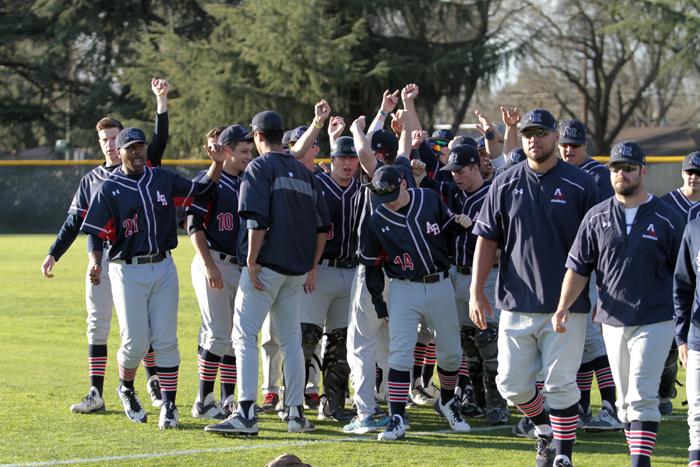 Following a dismal 2014 in which American River College’s baseball team finished last place in the Big 8 Conference (11-24 overall, 4-17 conference), the team bounced back in 2015 (17-19 overall, 9-12 conference) with a revamped offense to nearly claim a playoff spot.

It had a 90 percent chance of making the playoffs heading into the three final games of the season, only needing to sweep last placed Diablo Valley College and have Sierra College lose just one of its games against Santa Rosa Junior College.

ARC lost to DVC in the second game of the series by a score of 15-7 which drastically lowered, but did not eliminate ARC’s chance of making the playoffs.

ARC won its final game of the season in walk-off fashion in the final game against DVC, winning 9-8 after 14 innings.

Despite the win, ARC was not voted into the playoffs by the California Community College Athletic Association and finished fourth in the Big 8 Conference after finishing in last place one season ago.

Designated hitter Dalton Devries led the team with a .358 batting average, catching fire late in the season as the team went into the stretch run.

First baseman Kirby Broadbent started the season on a tear at the plate, batting over .600 and slugging over 1.000 before struggling mightily. He finished the season batting .292.

Pitcher Mike Marlar finished first in the state in saves with nine.

Devries, Gaskin and Marlar, along with shortstop Steven Mercado and Matt starting pitcher Gunter were all named to the All-Big-8 Conference team.

The team started the season poorly, losing the first two games to open the season against West Valley College before defeating Shasta College for its first win.

The team won just one of its next four games before winning four in a row against Mission College, Shasta College, Laney College and Solano Community College.

The four wins all came during a six game road trip and the team at one point had a seven-game road winning streak.

The four game win streak would be ARC’s longest of the season.

Most of the starters on the team were sophomores which will lead to a lot of new faces making up the team next season.

How to connect to ARC’s Wi-Fi