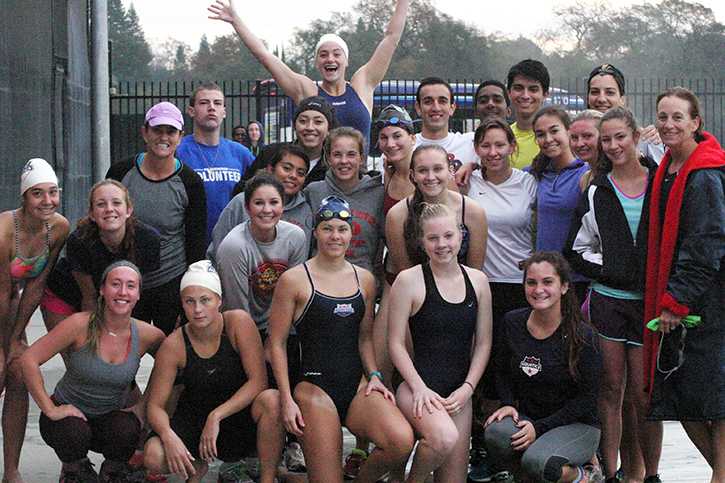 After a win from the women’s cross-country team today at the third annual duathlon, a running and swimming competition between cross-country and water polo, they are no longer tied 1-1 with the Water Polo team.

Cross-country and water polo each formed their own groups A, B, and C to compete in a 150 yard swim combined with a 1000 meter run relay that was repeated two times. A few runners from the men’s cross country team also participated.

The A team from each side was compiled of their best runners and swimmers.

“Its a really creative way to get the two different sports teams together,” said women’s cross-country runner, Laura Cox.

Warm ups started at 7:30 a.m., and the race began shortly after.

Prior to the start of the race, cross-country runner, Stillwell said, “I’m excited because I know people on the water polo team, so it’s fun to compete against them.  I hope we win.”

In the pool, swimmers from all teams were only a few short strokes away from each other, but once the runners were tagged in, the distance between them was made more visible.

Stillwell was first to cross the finish line, which was made up of a tunnel of teammates from both sports, resulting in a win for the cross-country team.

Shortly after the win, Black announced that the water polo team was challenging cross-country to a rematch in February around President’s Day.

“Its because we loaned them our athletes … but there is a rematch in February,” said Black while laughing.

Following the duathlon, cross-country coach Jeannette Allred-Powless rewarded everyone by paying for breakfast.

‘Epic Love’ Club Day is right around the corner