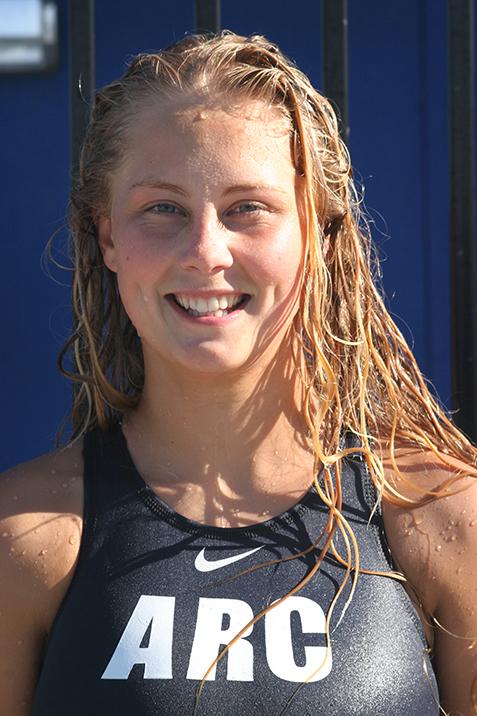 Dotterer says she began playing water polo in middle school at the insistence of her mother, despite being “unwilling.”

“I was so bad at water polo and I just hated it,” Dotterer said. “They put me in goal because I was really bad at swimming, and I just got really good at blocking balls. I was goalie ever since.”

Dotterer took a while to get the hang of water polo, a sport which can be difficult for some to follow.

“I’ve been playing competitively for seven years now, and it wasn’t until my senior year — that’s when I was like ‘I get this, I understand where people need to be who needs to drive, who needs to get the ball,’” said Dotterer. “So it took a while before it really clicked in my head.”

Rya Minow, a teammate of Dotterer’s says she enjoys working with her because Dotterer consistently motivates her peers.

“Its fun to work with her because she pushes you to be your best,” said Minow.

Dotterer is now one of the team’s captains, as well as maintaining a 4.0 GPA.

Dotterer credits her strict schedule for her success.

“The early mornings and doing homework in between games, that whole cycle is pretty routine (for me) and I’ve just gotten used to it,” Dotterer said. “I know a lot of people can’t handle playing a sport and getting a 4.0.”

In the rare instances when Dotterer has downtime, she says she spends it sleeping and studying for her other classes. Dotterer is also an assistant water polo coach at Oak ridge High School JV and Varsity, and she coaches club water polo for American River Water polo Club.

She has already began to look at colleges to transfer to once she finishes her studies at ARC.

“I’m looking at a couple different places. I am looking at Santa Clara and UC Davis. They are fairly close, which is good (because) I definitely want to play Division I. If I don’t play (Division I), it’s because I am just going to be pursuing academics because I know that comes first,” said Dotterer.

She said that she loves to play water polo but her goal is to become a lawyer.

“I see myself being a lawyer. I love water polo, but my passion is law,” Dotterer said. “I am pursuing a political science and English major, so that’s my goal and I am using water polo as a tool to get into the school of my dreams.”

ARC students turn out to donate for blood drive