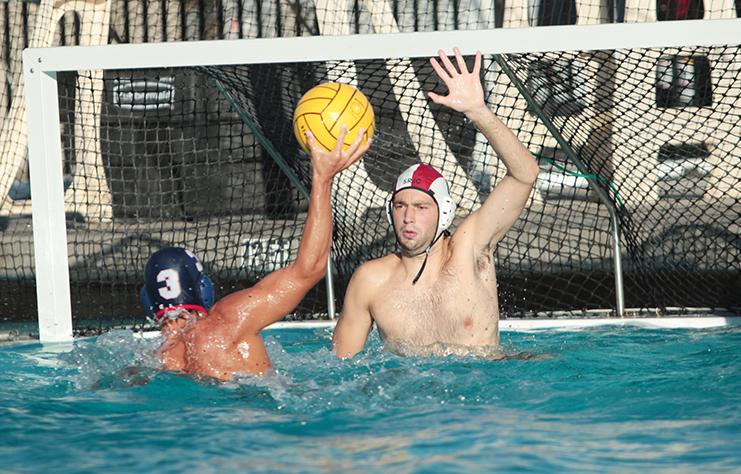 American River College men’s water polo defeated Santa Rosa Junior College 15-11 on Sept. 24, after gaining a significant lead early in the first half that SRJC was unable to make up, despite ARC playing from their bench.

Sophomore Lane Goedhart led the team in goals, scoring five before being pulled in the last quarter to replace injured sophomore keeper Mac Jarvis in the goal box.

Goedhart was followed by freshmen Alexander Cosgro and Stuart Samouville, with three goals each.

Head coach Eric Black, a vocal presence poolside, along with assistant coach Scott McCollum, used the early lead as an opportunity to give less experienced players a chance to get off the bench and gain valuable game time.

“Everyone on our bench are all freshmen. We talked at half about them using this opportunity to play a whole half, which they don’t normally get to do,” said McCollum. “I think they just have a need for more game experience to execute and do it as well as our starters.”

“The game was pretty much over at half,” McCollum said.

Black reiterated the inexperience of the team, but is pleased with the progress they have shown this season.

“You know, I think we’re gaining experience as we go along. It’s a very inexperienced team that I have this year. In past years, we’ve had players with a little more experience. One thing about inexperienced players is that they can grow real fast. So this group is growing pretty quickly,” head coach Eric Black said.

ARC will host both the NorCal and State championships this year. Black feels that the team has a reasonable shot at making NorCal.

“Our goal is to always make playoffs. I think we have an opportunity to do that. We’re going to have to play really well. But if we can get to the NorCal playoffs with this group, I feel really good about the job that we’ve done, and effort level that they would have put in,” Black said.

McCollum, however, feels that it is becoming harder to make NorCal, especially with the inexperience of this season’s team.

“It’s gotten much more difficult. The top six teams in Northern California make NorCal. We’ve done it every year, but again this is the least experienced and youngest team we’ve ever had, so it will be tough for us to be top six,” said McCollum. “State is obviously — you wanna include that in your goals. It probably won’t happen, but you can always train real hard and hope to shock the world at the end of the season.

“This is by far the — I keep saying this — the least experienced and youngest team we’ve ever had here. But it may be the best team we’ve had as far as teamwork and willingness to learn and improve their skills,” McCollum said.

Battle of the Bowls: Puppies and Kittens face off on Super Bowl Sunday