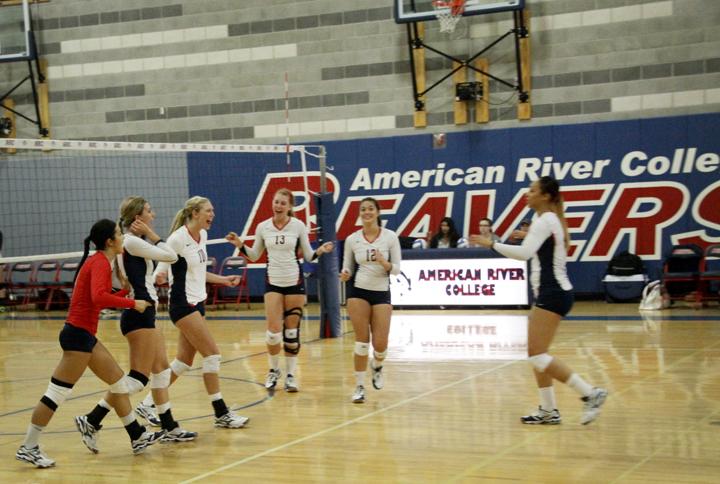 The Women’s Volleyball team celebrate after a successfully rallied and scored against the opposing team. (Photo by Brandon Nelson)

After finishing last season coming up short in the State tournament, the American River College volleyball team served up a win at home against City College of San Francisco, 3-0 (24-14, 25-22, 25-20) in their season opener.

“It feels good, we have been practicing hard,” sophomore libero Kiana Chaney said.

The women are returning two starters, Chaney and Taylor Bunger, and have several freshmen looking to contribute, but the players aren’t worried about having to start from scratch.

“ARC is always really good team wise, it’s because of (head coach) Ashlie (Frame) and our staff, they just push us.  I think once we click and play the way we do in practice everything will be fine,” Chaney said.

Even though the team won its first match of the season, they feel as though there is still much work to be done.

“We need to work on our communication,” Bunger said.

The women did seem content with their play in the first match though.

“It wasn’t too bad, there was a little bit of confusion, but I think it was just first game nerves,” Bunger said.

For some of the girls on the team this was the first time playing at the collegiate level.

“Once they realize that they can be a really good team they will have more confidence.  It will get drastically better by the end of the season, it’s just all new to them,” Frame said.

The goal for the women this season is to repeat as Conference champs and to make it back to the State championships.

“I think we can go back to State again, we just have to be disciplined,” Bunger said.

The women’s next match will take place tomorrow when they take on Foothill College and Fresno City College at Foothill.

Their next home match is Sept. 27 when they play Hartnell and Yuba College.  The first match begins at 1 p.m.

Editor-in-Chief puts down his pen to lobby for students

Be the first to comment on "Bump, Set, Spike, Win: Volleyball team opens season with lots of new faces"