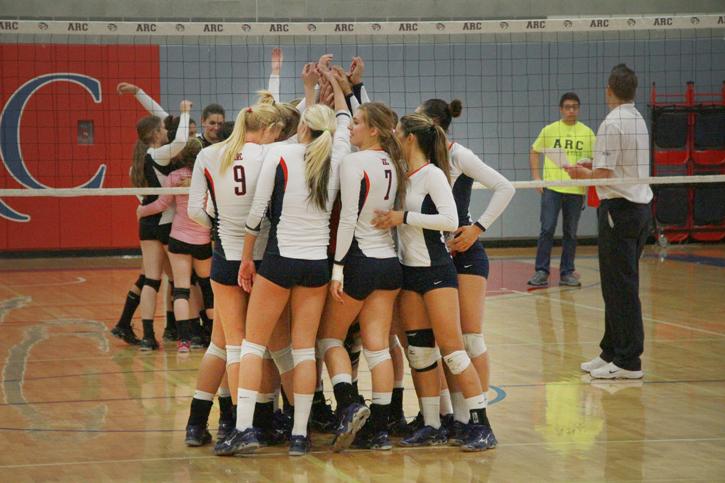 ARC’s volleyball team made its first appearance in the California Community College Athletic Association’s state tournament last season and had four members named to the All-Big 8 conference team. Head Coach Ashlie Frame was named the all –conference Coach of the Year. (Photo by Emily K. Rabasto)

Following a historic season in which the team made its first appearance in the California Community College Athletic Association’s state tournament under its current format, the American River College women’s volleyball team had four members named to the All-Big 8 Conference team.

The All-Conference roster is selected by the head coaches of the Big 8 Conference, who each submit a list of 12 players they believe should be included. For the second consecutive year, ARC had four members named to the roster. Libero Sophi Lozano, setter Jessica Condit, middle hitter Nicole Hareland and outside hitter Lauren Kirschke –all sophomores- were each selected.

Head coach Ashlie Frame was also honored with the conference’s Coach of the Year award.

Hareland, who was named the conference’s Most Valuable Player, received a full ride athletic scholarship to Humboldt State University and has begun her spring semester with the school’s spring volleyball program.

Lozano, who will be looking into opportunities at the University of Tennessee and California State University, Sacramento, among other schools in the coming month, was ecstatic when she learned of her selection to the roster.

“It has meant so much to me to be apart of such an honorable, record-setting team. I am so thrilled to be chosen for the First Team All Conference. I worked extremely hard these past two years and I am happy it paid off.”

Frame is aspirant that her sophomores will be able to continue their playing careers, as well as use their experiences to peruse other endeavors.

“Sophi Lozano is still looking, along with Lauren Kirschke, so hopefully they’ll get picked up in the spring to play at a four-year college,” said Frame. “Jessica Condit keeps having recurring injuries, so I think she’s going to be done playing volleyball and focus on paramedics school.”

Despite struggling with issues similar to her teammate, Lozano is dead-set on continuing her playing career. Frame is aware some scouts may be concerned about Lozano’s health going forward and said she is “hoping the knee injury (that caused her to wear a brace last season) doesn’t hinder her, but it can.”

“All I know is I am not done playing volleyball,” Lozano said in regards to her future. “I am not ready to retire the knee brace!”

With the awards being the final chapter of sorts to a season full of first-time milestones, Frame took time to reflect.

“Our last three years we’ve just had some great athletes, we have the respect of the other coaches in the conference, for them to agree that four of our players deserve all-conference is huge,” Frame said.

“I was (a part) of a legendary team, who set the bar high for incoming girls. You can’t get any further than we went last year…I wish all the new girls (and soon-to-be sophomores) the best of luck…but don’t forget which team set the standards high.”

Women’s volleyball overcomes slump against Gavilan, advances to third round