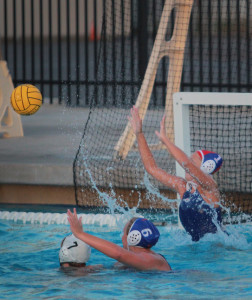 The American River College women’s water polo team has played short-handed to begin the 2013 season.  As of Sept. 23 the women’s team is ranked No. 4 in the state according to the coaches poll.

Despite starting the season with sophomore captain defender Mackenzie Kaplan lost to injury the women have started out 4-3 and are 1-0 in conference play.

“(Kaplan) is one of our strongest players,” sophomore defender Carly Ashen said.  “She’s our primary defender. A broken finger is not the best way to start off the season, but we have been able to cope with it.  We have had a couple (of) girls come off the bench, including myself, into starting positions, so I think we have been doing pretty well.  Hopefully she will be back in the pool soon.”

The team has faced many challenges early this season concerning injuries.

Not only was the team without Kaplan, it was also without freshman center Michal Andrieatta who was out with a concussion for the first few games.

Sophomore attacker Jenner Johnson was concerned about having two of their starters out for the first tournament. “We like to compete,” she said.

At the River Rage Tournament held at American River College the women went 2-2 versus teams from Southern California.

The goal for this season remains winning with hopes of making it to the state tournament.

“To win,” freshman goalie and team captain goalie Avery Dotterer said.  “Not just to win but with each team that I have ever had, we have to really start from the bottom and work our way to the top and I think that’s the most exciting part of playing on a new team, is starting back at square one and building those building blocks, fundamentals, working on them, and just improving our game skills, and also winning the Big 8 tournament and Nor-Cal this year, because we are the best.”

This team is different from last year’s in that the players have more speed in the pool.

“We are pretty fast so we are a good counter-attacking team,” head coach Bethani Black said.  “We have a strong goalie. That helps and gives us a variety of options for what we play defensively.”

The ladies look to improve upon their record from last season, which saw them finish 14-13, and ranked 22 in the state.

New head coach has his team on the right path

Sophomore co-captains are the ultimate package

Be the first to comment on "Broken but not bowed"