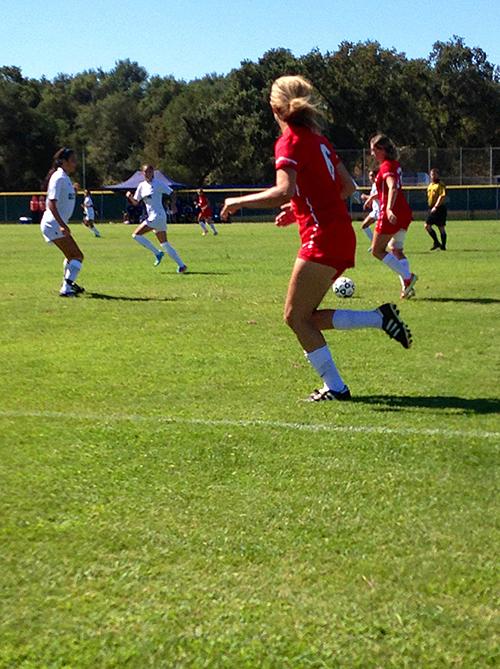 The No. 11 ranked American River College women’s soccer team kicked off its season Saturday, Aug. 31, playing host to the No. 7 ranked team College of the Canyons.  Despite a strong end to the 2012 season the team struggled to score, losing 2-0.

“We’re pretty young, not in age but in experience,” head coach Paul Arellanes said. College of the Canyons’ sophomore forward Allie Leon found a way to penetrate the Beavers’ defense. She scored her team’s goals by way of a penalty kick in the first half, and an assisted corner kick in the second.

“Defensively we were solid,” said Arellanes.  Sophomore defenders Kelsey Stillwell and Goretti DeAnda repeatedly stopped the Cougars’ relentless offensive attack with timely clears and tackles, despite a disadvantage in size and time of possession.

The lack of experience showed on the offensive end as the Beavers struggled to push the ball and capitalize on chances to score.  “We lost our two leading goal scorers from last year, so we have to find someone to step into that role,” Arellanes said.

Arellanes went on to say the team had to improve at getting the ball into “dangerous areas,” such as the box in front of the goal.

One of those moments came when freshman Haley Hallaran bounced a shot from the top of the box off the crossbar following a picturesque pass from fellow freshman Jazzmin Hancock late in the second half.

“It’s early and we will make adjustments.” Arellanes said.

Their next home game will be Sept. 10 at 4 p.m. versus Feather River College.

Opinion: How do I define myself?

Hip-hop is going back to Cali

Be the first to comment on "Soccer season opener spoiled"