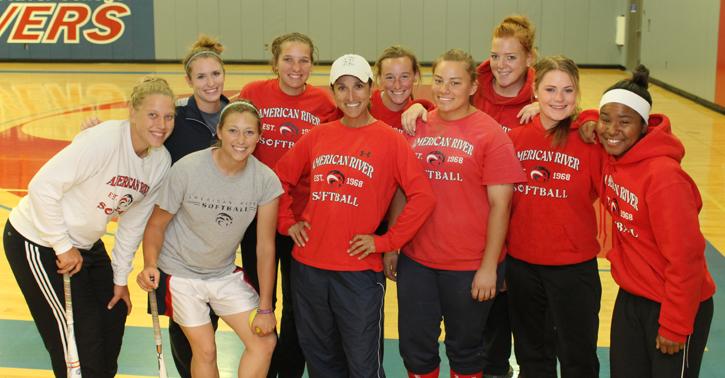 Women’s Softball coach Lisa Delgado (center) and a few of her student athletes in the gym for a rainy day practice on Wednesday, March 20, 2013.

Coaches face many different types of adversity including the pressure to win, gain recognition and recruit star athletes.

When it comes to coaching at a community college there are many obstacles coaches face.  These challenges include a lack of funding, not being able to offer scholarships to prospective athletes and lack of exposure.

Men’s Track and Field and Cross Country coach Rick Anderson knows how difficult it can be to get students to come American River Junior College rather than go to a four year university right out of high school.

“I lost the high school state champion in the mile one year,” Anderson said. “I lost him to Cal Poly for $4,000. I mean the school costs $35,000 with housing and all the fees associated with it, so he paid $31,00 to save $4,000, and he could have come here and I think that he would have run fast enough that he could have gone wherever he wanted and gotten a lot more money.”

Andersons recruiting method is taking prospective athletes into his office. The awards and trophies showcased throughout the room are enough for most athletes to make a decision.

He is successful in recruiting even with a lack of mainstream coverage. Since 2005 his teams has claimed 4 state championships they have only been featured on the local news once.

“Most of the high school kids don’t hear much about my programs,” Anderson said. “There is just no press.”

The softball team operates in a different way when it comes to recruiting.  They rely on word of mouth to get players to come visit.  Head coach Lisa Delgado uses current and former players to help inform recruits about why they love the program.

“When you can throw some names out that they recognize and they know how good they are it definitely helps with recruiting,” Delgado said.  “We absolutely use our student athletes to tell them this is what American River is all about.”

Delgado has set up a family based team where everyone is always included.

“If someone is going to Starbucks or Chipotle they send out a mass text inviting everyone,” Delgado said. “We don’t have different cliques. It’s all one big team.”

“Everything we do is to prepare them for the next game as well as the next level,” Delgado said.  “I love our student athletes.”