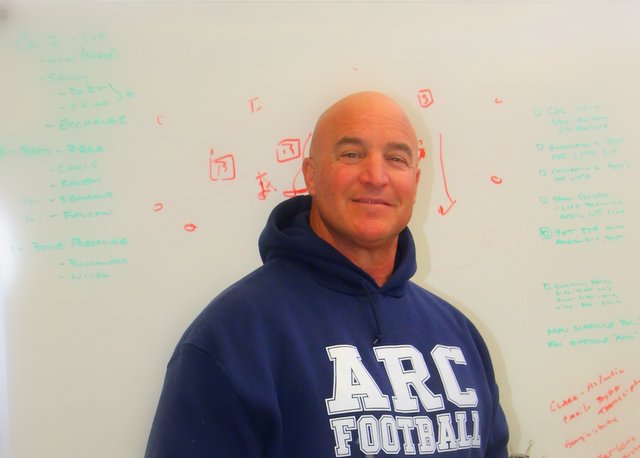 (Sacramento) Head football coach Jerry Haflich in his office where planning is going on for the 2013 beavers season.

The American River College football team looks to rebuild for the 2013 season after losing star athletes.

Commitment day: An important time in the life of a college football team, the intent of coaches to fill roster spots for a team that has had great success over the last three seasons.

29-4: now those are numbers you can build a team around, and that’s exactly what American River Football head Coach Jerry Haflich is trying to do.

“There are 26 student athletes on the current commitment list,” Haflich said. He hopes to add 10-12 more players before spring off-season training, which begins on April 1.

Coaches will focus on a core of returning players while trying to fill positions on both sides of the line. These are complications that past star players, like Devntae Booker, Zane Petty and Sampson Faifili, left behind, when moving to larger institutions like University of Illinois, University of Utah, and Kansas State University. All three stacked the team to an impressive 8-2 record last year.

A lot of recruiting work will go into filling open positions around the essential core of returning players, such as quarterback Michael Hicks, who is returning to takes snaps for the team. He posted 78 completions for more than 1100 yards of passing in 2012. Coaches will be trying to bring at least 4 or 5 players for the quarterback position in 2013.

The recruiting class mixed with the players returning from last season gives Halfich a positive outlook on the upcoming season. “We have exciting players,” he said.

Coach Haflich mentioned that last year’s team was built with almost entirely new players, and this year’s Beaver squad will face the same challenges. Dedication by student players at commitment day is how coaches, like Haflich, can begin to construct a picture of what their upcoming season will look like.

“I’m excited about the future,” Haflich said as he cracked a smile.” We will be ready!”