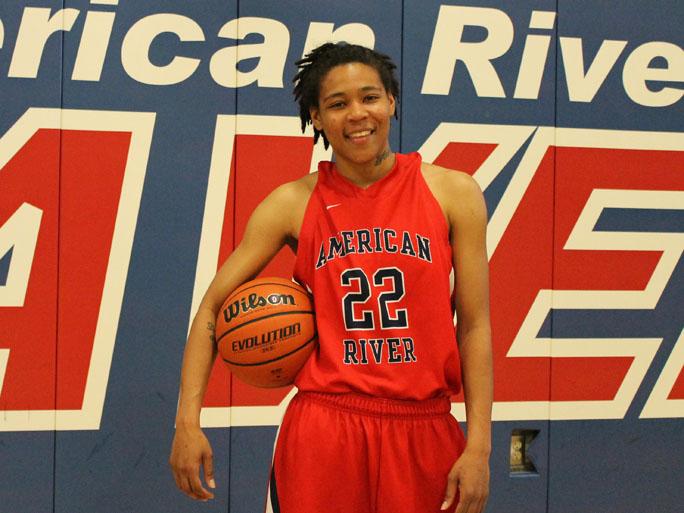 Eunique Hopkins, freshman guard for American River who’s been playing basketball since she was nine, now leads the state of California in steals per game with 5.5. (Photo by Stephanie Lee)

Freshman guard Eunique Hopkins is setting history by leading the state of California in steals, averaging 5.5 per game

The opposing team has just inbounded the basketball and is trying to take time off the clock. They are slowly dribbling the ball across the court, trying to set up their offense.   Teammates are yelling at the ball handler to pass, when, all of a sudden, out of the wing swoops in Eunique Hopkins for a steal.

This has been a scene that has played out many times this year for American River College women’s basketball freshman guard Eunique Hopkins, who currently leads the state of Calif., averaging 5.5 steals per game.

The fact that she has done this without starting every game this season is a feat in itself.

Hopkins began by running track at the age of seven. She moved onto basketball when she was nine. When watching her play, you can see that she still utilizes her track skills.

“She has the court speed of a Division I athlete,” head coach J.R. Matsunami said.  “It’s like having Kobe on the floor. You’ll see things that she does that you’ll just go, ‘where did that come from?’ because it’s a guy’s level of play.”

She credits her uncle with being the one who got her involved with basketball.  Her coach recognizes her talents.

“She plays off of her instincts,” Matsunami said.  “A lot of the things that she does you can’t coach. It’s just anticipation and reaction to the ball and she’s athletic enough to do it. That’s a positive for her.”

Her teammates feel her presence on the court; she plays with a style that is indescribable.

“I don’t think that I have ever played with anybody like Eunique,” teammate Chelsea Trotter said. “She just brings so much heart, she’s like the heart of the team. I couldn’t ask for anybody more to play with than Eunique.”

Hopkins is currently working toward a social science major with the hopes of one day going on to play basketball for a Division I college team anywhere that she can. She would like to use her degree to become a probation officer.

“I think she understands that she has to fulfill the whole realm of expectation and that is being a student athlete, and that’s a great thing to lead the state in steals, but it would be better to get an ‘A,’” Matsunami said.

She thinks of her 11-month-old daughter when she needs some extra motivation to keep going on and off the court.

“My inspiration, what would keep me going, would be my daughter Zaiyanna,” said Hopkins.

Hopkins admits that she struggles offensively and will be working on it during the offseason.

“I think I need to work on shooting more. I don’t shoot a lot,” Hopkins said.  “I like to make defense basically our offense on the team.  If I do end up getting a steal, it’s better for us as a team. I like passing the ball.”

Hopkins chose American River College due to how close it was to her home.

“Now that I’m here, I want to come back because I like the environment and everything. I love this team, I love my coach,” Hopkins said.

If Hopkins can keep up with her work ethic, she will be a strong leader for the team next season.

Be the first to comment on "Hands of steal"