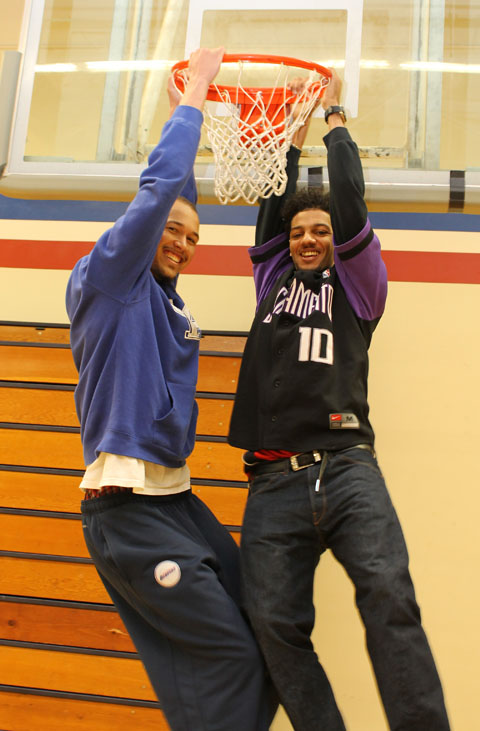 Sophomores Chad Haysbert (left) and Mardell Thompson currently serve as co-captains of the Beavers basketball team this season. Through 19 games thus far, both currently share the lead for average points per game. (Photo by Stephanie Lee)

Mardell Thompson and Chad Haysbert are leading the surging Beavers into the playoffs.

The sophomore basketball captains, Mardell Thompson and Chad Haysbert, have led the American River College men’s team through adversity this season.  The team’s chemistry has been affected by injuries and they are working toward turning the season around.

“They are all team players,” Mike Selling, the assistant coach said. “I don’t think that any of them are really selfish. And when you have good talented players, a lot of times they can be selfish.”

Haysbert is a force to be reckoned with. This season alone, he averages 13.4 points and 8.4 rebounds per game. He has showcased his strengths throughout the season. “I’m tall but I’m quick, so if a big man is guarding me, I am able to out-speed him,” Haysbert said. “But if a shorter, quicker person is on me, I am able to use my strength to overpower him.”

He also knows there are aspects to his game that he can improve to continue competing at a high level. “My weakness probably is my confidence in my shot,” Haysbert said. “I prefer a drive in to the hoop and doing layups.”

His coaches know the impact Haysbert makes on the court. “Chad is a game changer. He can guard all five positions,” Selling said. “He’s just a very skilled big man.”

Outside of basketball, Haysbert, who is a business major, doesn’t do much. He admits that, other than going to the gym, school, and basketball, he is a homebody who loves spending time with his Maltipoo dog, Milly. Furthermore, he states his mom has had the biggest impact on his life. “My role model has always been my mom,” Haysbert said. “She’s been a single mom since I’ve been in kindergarten, so she’s been really my only person to look up to my whole life.”

Mardell Thompson has also been an asset to the team this season. His leadership on the court is one of his strengths. He averages 14.4 points and nearly 2 steals per game. Selling believes Thompson is also a game changer. “His athletic ability and his passion for the game when he’s on the court—he wants to do everything,“ Selling said.

Thompson’s goal is to obtain a scholarship to play at a higher level. There are a few schools pursuing him at the moment. “Chaminade in Maui, Dixie State in Utah—they’re on me pretty hard—and Chico State,” Thompson said.

“I can get the ball in the bucket,” Thompson said, but he isn’t afraid to admit that there is always room for improvement, especially defensively.

A social science major, Thompson is a self-proclaimed fun guy who eats a bag of trail mix before each game. He has also participated in track and field. He pursued sports because his uncles encouraged him. “My uncles pushed me into playing all these sports and made me the athlete that I am today,” Thompson said.

Although the season hasn’t been ideal for the team, they our finally finding the chemistry they have been lacking because of these two young men. “As soon as our chemistry catches up with our potential, then we will be a real solid team,” Thompson said.

New head coach has his team on the right path

Broken but not bowed