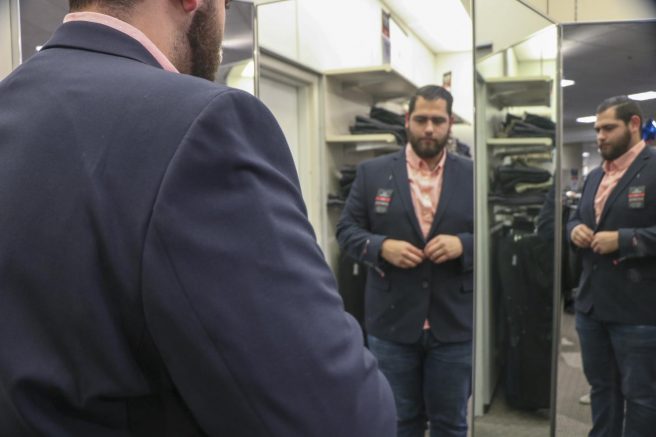 American River College’s Career and Pathways Support Services hosted a Suit Up Event at JCPenney on Sunday, March 10, where Los Rios Community College District students and their families were able to shop career attire and other amenities at a discounted price.

Sacramento-based food trucks Yolanda’s Tamales and Bubble Cone were parked outside the JCPenney store at Arden Fair Mall as early as 5:00 p.m., and it did not take long for guests to start flocking there.

The event was also an opportunity to raise money toward student education, as 15 percent of the profits from each food truck will go toward scholarships provided by CAPSS.

Sandra Yanez, a member of the Yolanda’s Tamales team, said she was excited to help operate the food truck for a good cause.

“We like to give back to the community and we do a lot of fundraising,” Yanez said. “We just came out with our food truck too, so we’re really excited to come here.”

Fans of the food trucks gathered outside, some sitting on the curb eating soft shell tacos and sipping horchata. 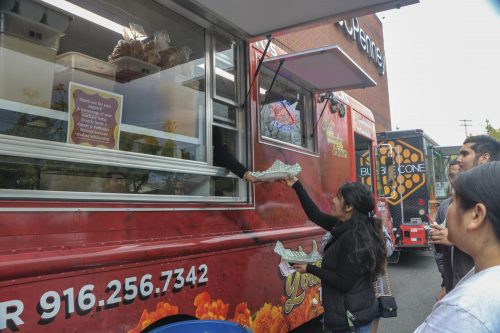 Guests are handed soft shell tacos through the pickup window of Yolanda’s Tamales outside the Suit Up Event on March 10, 2019. (Photo by Irene Jacobs)

Doors opened around 6:15 p.m., when students and their families were greeted with a 40 percent off voucher, a shopping guide, and a raffle ticket. A large banner announcing the Suit Up Event spelled out in silver balloons was strung near the entryway, beckoning guests to venture further into the store.

Men’s attire was on the first floor, where guests of all ages wandered around sifting through suit jackets with the aid of JCPenney staff. One of the guests was business major Gerald R. Chasten III.

“I found out about [this event] from all the flyers that are posted around campus,” Chasten said. “I told all my friends about it, because I was in desperate need of a suit—all my suits from prom got small.”

Chasten picked out a deep burgundy suit jacket and a pair of velvet loafers, which he said he had been trying to get his hands on for a long time.

A measurement booth was overseen by a JCPenney employee and some CAPSS volunteers, including ARC’s professor of funeral services, Nathan Skelton who described how he encouraged his students to partake in the event.

“The students in the funeral services have a requirement to dress professionally in class,” Skelton said. “Working in the funeral home I know how expensive professional dress can be …  I tried to get them [my students] to come and take advantage of the sale and I just wanted to be here to show that I thought it was a good idea.” 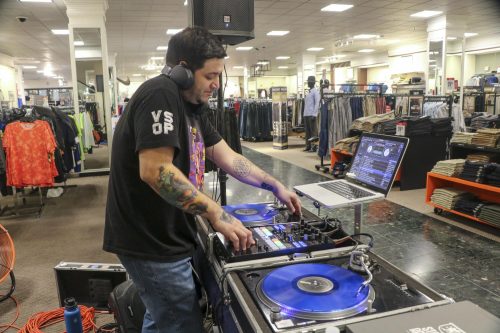 American River College music student Ricardo Preciado, or DJ Riktor, mixed music from a booth in the JCPenney at Arden Fair Mall during the Suit Up Event on March 10, 2019. (Photo by Irene Jacobs)

Meanwhile upstairs, ladies sifted through professional dresses, accessories, and shoes before stopping by the Sephora booth for free samples and makeup tips.

Every half hour, a JCPenney gift card was raffled off and a gift bag of Sephora goodies was awarded to a winner.

ARC student Ricardo Preciado, a.k.a. DJ Riktor, rocked the house throughout the evening with thumping Top 40 music from past and current generations.

“We’ve had a good turnout, and people are having fun,” Adams said. “I think we’ll definitely do this again.”

The Career Expo will be held on April 3 and 4 in the Student Center, where students can attend free workshops and meet possible employers.