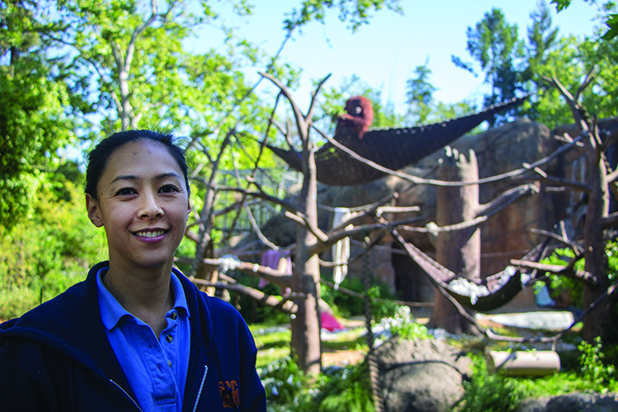 The primary keeper of the primates, Janine Steele, stands in front of the sumatran exhibit at the Sacramento Zoo on April 25. (Photo by Ashley Hayes-Stone)

Anthropology 372 Primatology Field Studies class will be held during American River College’s summer session this year, instead of its usual spring semester.

The class focuses on the observation of non-human primates, according to its instructor,Kristina Casper-Denman,

“This class actually came out of a program that was originally started by the Jane Goodall Institute, back in the mid-1980s,” Casper-Denman said. 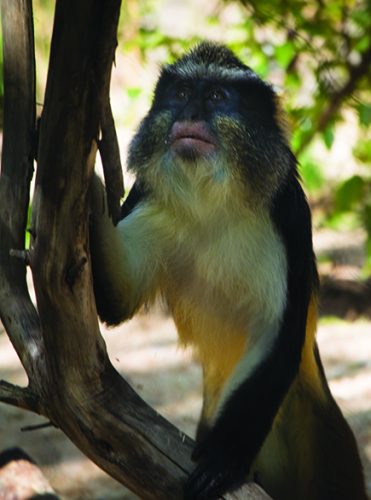 A wolf’s guenon leans on a branch at the Sacramento Zoo on April 25, 2018. (Photo by Ashley Hayes-Stone)

The primates are sometimes difficult to observe in the spring because of the weather. Casper-Denman said.

The students may feel like they are spending more time at the zoo because the shorter session, however it is the same amount of class time. Casper-Denman explained.

Janine Steele, the the primary keeper of primates at the Sacramento Zoo, explained some of the happenings of a few different primate groups. She has worked at the zoo for 16 years.

“They tend to have litters of babies [composed] of groups of three to four individuals. To remember who was with what litter group that year, it made it easier to [name them using]  different food groups,” Steele said.

Some of the ruff lemurs, Steele explained, have house names based on food.

“We have a group of cheeses, a group of hot sauces and spices. We have three different generations in this group.” Steele said.

Steele said the summer class could be a good time for observation of the primates but more specifically during the morning hours. When it starts to get hot they tend to become more lethargic and not be out in the viewing area, she said

In the spring semester the weather is unstable and in the summer primates do not like the heat. However, in the summer, the mornings are nice and cool.

Molli Franchar, an anthropology major at ARC, took the class in the spring after a recent change of major. Franchar said wanted to get into marine biology. She has an extreme love for animals. She took this class after a suggestion from Casper-Denman.

“The class was an amazing experience. It is hands down my favorite course that contributes to my [anthropology] degree that I have taken so far,” Franchar said.

This is the first time 372 Primatology will be offered in the summer session. Casper-Denman wanted to be sure high school students also had the opportunity to attend as well as those just graduating.

Letter to the editor: Threat suspect convicted by the press