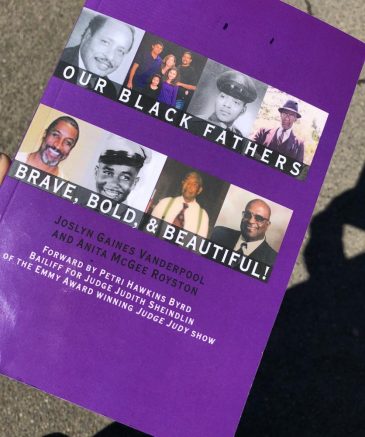 Gaines’ book signing and the subject of her book coincided with Black History Month and the book deals with the societal issues surrounding black fatherhood, such as black men being absent or unfit fathers.

The main purposes behind the writing of the book was to “dispel common stereotypes placed upon black men and fathers,” and to “…preserve the legacy of black men,” Gaines said .

Gaines and her co-author, Anita Mcgee Royston, came together to write this book after meeting at a conference and discussing their experiences growing up with their fathers.

At that conference, Gaines and Royston said they were shocked when one of the speakers showed statistics trying to correlate black college student’s poor success rates to many of those students having absentee fathers.

“The speaker made it sound as if all black men were responsible for the issues facing the educational system and were derelict in their duties as dads,” Gaines said.

Gaines and Royston say they grew up with supportive fathers who provided them a shining example of what a black man and black father could and should be. They knew what this speaker said didn’t truly reflect on all black fathers.

Throughout the book, the authors showcased the stories of people who were raised and nurtured by men other than their biological fathers.

“Well, I personally knew plenty of fathers who were extremely engaged in their children’s upbringing because they existed in my neighborhood, in our churches and throughout the community” Gaines said.

“And they came in the form of biological fathers, step-fathers, grandfathers, uncles, deacons, teachers, and men who stepped up when others couldn’t or wouldn’t,” Gaines said.

Gaines and Royston wanted to then uncover the often discarded legacy of black men through people telling the stories of their black fathers.

Gaines’ father was a air force veteran who served in the Korean war.

Gaine’s father was born in the twenties during the Great Depression and endured harsh and brutal racism while growing up and also when he became a grown adult raising his children.

Despite the obstacles Gaines’ father faced, he still strove to be the best father he could be and that gave Gaines a strong foundation on self-love and how to love herself as a black woman.

“Back stateside, my father rescued me from my daily second grade hell of being called a wide range of derogatory names, the ‘N-word’ being the most prominent racial slur directed towards me,”  Gaines said in “Our Black Fathers.”