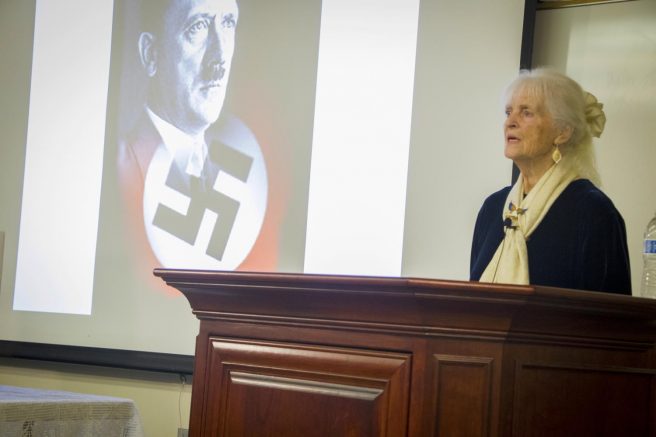 Ingrid Radke-Azvedo talks about the importance of the American Constitution at American River College on Nov. 9. (Photo by Ashley Hayes-Stone)

Ingrid Radke-Azvedo was born in the heart of Germany in 1934. As a small girl, Radke-Azvedo enjoyed what most young children do: playing with dolls, spending time outside and creating rich fantasy worlds in her mind.

What separates Radke-Azvedo from other girls her age was that she grew up in the shadow of one of history’s cruelest dictators, Adolf Hitler.

While not Jewish, Romani or any of other dozens of groups that Hitler and the Nazis flagged for execution, Radke-Azvedo came face-to-face with the brutal reality of Nazi Germany when her mother decided to allow a Jewish scientist to live in secret in a house that the family owned.

Radke-Azvedo remembers being sworn to secrecy by her mother and told never to tell anyone what the family was doing. Even at the young age of 5, Radke-Azvedo understood the consequences of breaking such a promise.

The memory of what happened to that Jewish scientist still brings Radke-Azvedo to tears.

She remembers going to check on him early one morning and finding the house a mess. Papers were strewn across the room where the doctor lived, his books were thrown to the floor. The only evidence of what happened was a puddle of blood on the ground.

It was then that Radke-Azvedo knew she had to escape Germany and in her heart there was only one destination: the United States of America.

Radke-Avedo was only able to successfully enter to the United States after several more years in war-torn Germany and as a 24-year-old. She survived aerial bombings, nazi troops and one of the largest genocides the world has ever seen to get here, but Radke-Avedo was determined and wanted nothing else in the world.

It is here in the U.S. that she has spent the entirety of her adult life. She has served on two congressionally appointed committees, served as a public speaker and wrote a book about her early childhood experiences called “Out of the Rubble.”

Radke-Azvedo recently sat down with The Current before delivering a College Hour speech on Nov. 9 at American River College to talk about her experiences and some of the lessons she learned from witnessing the birth and death of Nazi Germany.

The Current: Writing your autobiography “Out of the Rubble” must have been extremely challenging. Did you find it difficult to not only re-live such traumatic experiences but to write about them for all the world to see?

Radke-Avedo: “It was. I did a year of research just to make sure that my memories coincided with the dates. I am an eyewitness to the horrors of Germany. It brought back a lot of horrible memories. My mother worked for the underground. She took a chance with our life by taking in a Jewish scientist. He was hidden in a house on our property. I used to go up there at night time when it was dark and in the morning before it got light and take him food, water, the newspaper and messages from his friends. And then one morning I came up there with my tray of cookies, there was blood on the floor and he was gone.”

C: I imagine seeing scenes like that would leave you with a profoundly different world view than the average child your age. The odd thing here is that it seems to have left you with an almost positive view of the world, is that accurate?

RA: “It did, it did. I can still smell it, I can hear it, I can see it. I learned a lot about life at a really young age. But most importantly I learned about freedom. I was a slave to Hitler. We had no life. He stole my childhood and he stole my youth. In America, I have freedom. The most important thing for me as a kid was that there was freedom somewhere. The Americans used to bomb us. They used to kill us. They used to come in and really wipe us out but as soon as the war was over, they were our friends and they were looking to see how they could help us. They helped Germany to get back on its feet but you see, the second world war never stopped. The only thing that is saving us now is the Constitution of the United States.”

C: What do you mean?

RA: “The Constitution of the United States is the most important and only valuable tool that we have left right now. Our forefathers came from different backgrounds and they saw what the time had to offer them and took advantage of it. We had the Civil War because America was still in that fighting mood but then all of a sudden American turned into the most fantastic country in the world. But now, we’ve moved away from that.”

C: Why do you think that is?

RA: “Greed. It’s not just the greed of the rich and the powerful either.”

C: Where is the greed coming from then?

RA: “Look, when you elect someone to Congress, and I don’t care if they’re Democrat or Republican, they are elected by the people to do a job. I’ve taken that constitutional oath several times. I’ve been confirmed by the U.S. Senate twice and the California Senate twice. When I lifted my hand, that was solemn. From the heart. I would die for that oath. We have, on both sides, people that are not doing their job. And they took that oath and you and I are paying their salary and that’s not right. That’s where the greed is coming from.”

C: Aside from political greed, do you see any similarities between the time we live in now to the era that you grew up in?

RA: “I definitely see the similarity in the time that we’re living in to the time I grew up. It scares me for my children. I do not wish to see my children have to live through the same thing. But what scares me more than anything, is that is always America that helped everybody out of their mess. They were generous, they were helpful. It didn’t matter if they attacked them in the beginning, they were there for people. We don’t have that American anymore. America is broke.”

C: Do you still have hope for the future though?

C: Where does that hope come from?

RA: “We haven’t lost yet. We lost an election. Not the war. I absolutely believe that this world will rejuvenate. We now have to work on unity in America and we have to teach our children what happened in the past and what can be ahead of them. We have to teach them with honesty and not by destroying the past. If we go down, I can go down because I’ve been there once before but we will not. I think the American people are beginning to see it.”

Artists showcase their work at the Shadow Box Gallery