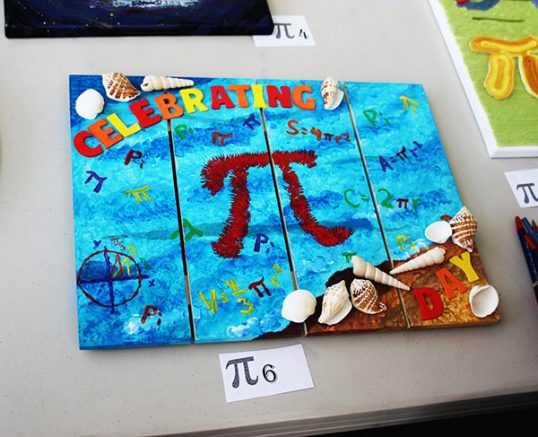 On March 14, American River College hosted its annual “Pi Day” festival, which included pie eating contests, a reciting of the 3.14 numerical sequence, puzzles and a vote for the best art project.

The date March 14 is associated with “Pi Day” because the irrational number pi has its first three digits as three, one, and four.

Mathematics professor Rocio Owens hosted the event along with the math department.

“This is the third year of Pi Day and the fourth year of the contest,” Owens said.

At the event an assortment of different pies were available to try including lemon and razzleberry.

“I felt adventurous today, I ate the razzleberry but they didn’t have coconut cream,” Poskin said.

“I take math but not the hard courses,” Manson said.

Tiara Abraham won a game called “Recite the Numbers of Pi.” Abraham is a member of MENSA, an international society for those with high IQs.

Her mother Taji Abraham was also at the event. She said she started learning how to remember the pi numbers on Saturday and wanted to recite more than 70 digits for a testing game  at the event.

Tiara Abraham, who attends ARC taking foreign language and music classes, recited 469 digits during the same game and said she enjoyed it.